The Young and the Restless Spoilers: Kyle and Lola Make Love First Time – Summer Gets Revenge After Lola Gives Up Virginity

BY Heather Hughes on April 26, 2019 | Comments: one comment
Related : Soap Opera, Spoiler, Television, The Young and the Restless 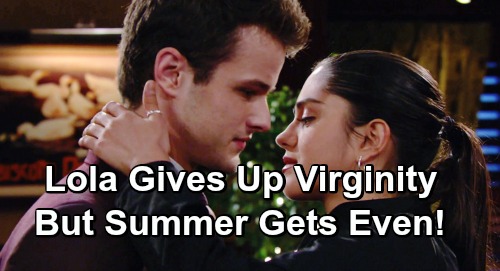 The Young and the Restless (Y&R) spoilers tease that a big moment’s coming up for Lola Rosales (Sasha Calle). Y&R made a huge fuss about Lola’s virginity throughout her relationship with Kyle Abbott (Michael Mealor). Once Summer Abbott (Hunter King) started stirring the pot again, Lola’s insecurities came out and it let to some huge sex-related fights.

However, Lola’s had a change of heart after all the liver transplant and sham marriage drama. She’s ready to move forward with Kyle, so they’ll deepen their romance on new Y&R episodes the week of April 29 to May 3.

The Young and the Restless spoilers say Kyle and Lola will make love for the first time. It’ll undoubtedly be everything Lola hoped for, so she’ll be glad she waited until her perfect guy came along.

Kyle is all in on Lola right now, so he’ll probably be content as well. He truly loves her, but what about Summer? For starters, it’s tacky of Kyle to jump right into bed with Lola. Will Kyle and Summer’s marriage even be legally over when this happens?

You could argue it doesn’t matter since Kyle never meant his vows to Summer, but it still shows he’s far from the romantic Y&R hero he once was.

Nevertheless, Kyle and Lola’s love will flourish after they take the leap. They’ll be on cloud nine and will certainly continue all the lovemaking. Kyle will feel like he’s finally got it all. He’s back with Lola and she’s willing to give him the physical aspect of the relationship he was craving. It’ll bring a new level of closeness, which should be brutal for Summer

Of course, Summer may be down, but she’s not out. As hard as it’ll be to watch Kyle move on with Lola, Summer will toughen up and focus on what she wants. The Young and the Restless spoilers state that Summer will find new ways to hopefully come between Lola and Kyle. She’ll go to extremes as she tries to renew Kyle’s interest in her.

What will this mean for Lola and Kyle’s relationship? Will Kyle take Lola’s virginity only to break her heart later? Kyle could soon drift back in Summer’s direction, so The Young and the Restless spoilers say this love triangle will heat up once again.

It should be interesting to see what Summer attempts and how Kyle will react. We’ll give you updates as other Y&R news comes in. Stay tuned to the CBS soap and don’t forget to check CDL often for the latest Young and the Restless spoilers, updates, and news.