The Young and the Restless Spoilers: Kyle Goes Against Lola’s Wishes, Sleeps with Summer Again – Shows Who He Truly Wants 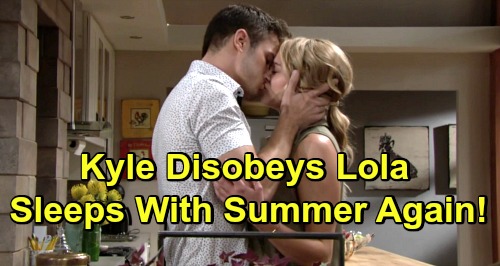 The Young and the Restless (Y&R) spoilers tease that Kyle Abbott (Michael Mealor) could be playing with fire. He seems to be in denial about his torn heart. Kyle claims Lola Rosales (Sasha Calle) is the only one he wants, but he refuses to cut ties with Summer Abbott (Hunter King). He doesn’t want to break Summer’s heart or provoke her vengeful wrath, so he’s dragging his feet.

However, there may be a deeper reason for Kyle’s hesitance. Lola herself even brings it up in Tuesday’s Y&R episode. When she learns Kyle still hasn’t split from Summer, she assumes it’s because he’s still in love with her. Kyle maintains that he just has to find a way to minimize the damage, but there’s clearly more to it than that.

Deep down, Kyle is in love with Summer, too. It’s just a matter of levels here. Does Kyle love Lola more or Summer more? He’s probably sure right now, which may be why he’s stringing Lola along while he makes a firm decision on Summer. Of course, Lola’s request on Tuesday could lead to big trouble. She asks Kyle not to have sex with Summer again, but is that something Kyle’s willing to do now?

Summer has always worked this angle to her advantage. She’s not above using her body to entice Kyle, especially since she’s convinced the rest will come later. Summer will inevitably be trying to get Kyle back in the bedroom as quick as she can. He may put up a fight, but what happens when she gives him those puppy dog eyes and pouts? Kyle may be putty in her hands as usual.

The Young and the Restless fans can’t forget how Kyle once chased Summer relentlessly. He also made a bet with Summer and won, so his prize was a hot hookup. Kyle pretended to fall asleep to avoid it because it wasn’t real. He craved true intimacy with Summer, which may be why he threw out his plan to remain celibate in this marriage.

Now Kyle has that long-awaited intimacy. Summer wants Kyle and loves him with everything she’s got, so can he really avoid temptation? Will Kyle keep sleeping with Summer and try to keep it a secret from Lola? Will the truth eventually break Lola’s heart?