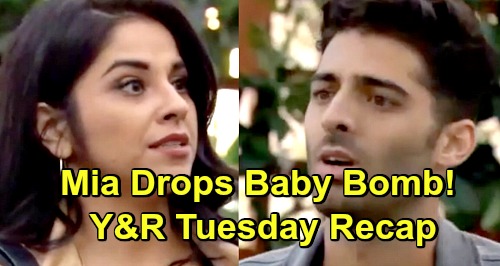 The Young and the Restless (Y&R) spoilers for Tuesday, April 16, tease that Kyle Abbott (Michael Mealor) will have some updates for Jack Abbott (Peter Bergman). He’ll admit that Summer Abbott (Hunter King) knows about his night with Lola Rosales (Sasha Calle), but he couldn’t bring himself to end things. Kyle will decide the best way to do this is to just convince Summer she doesn’t want him.

Meanwhile, Abby Newman (Melissa Ordway) will try shut down Arturo Rosales’ (Jason Canela) apology. She won’t want to hear it, but Arturo will keep pushing for another chance. Abby will eventually determine that Arturo has shown genuine remorse. She’ll reflect on her own cheating and suggest that Arturo deserves another shot, but Mia Rosales (Noemi Gonzalez) will interrupt.

When Abby tells Mia to get lost, Arturo’s ex will refuse. Abby will get fed up with Mia always coming between them, so she’ll order both Mia and Arturo to leave. Back with Kyle, he’ll break the news to Lola that he hasn’t split from Summer yet. Lola will assume it’s because he still loves Summer, but Kyle will contend that he just doesn’t want Summer to seek revenge.

After promising to handle this delicately, Kyle will assure Lola of his love and give her a kiss. Soon after, Summer will track Kyle down and wonder what’s going on. Kyle will think they should chat over lunch, but his plan to end their relationship will undoubtedly hit some snags.

Next, Abby will rant to Lola about Mia causing more drama. She has no idea just how much! That’s because Mia will drop the baby bomb on Arturo in Tuesday’s Y&R episode. She’ll start by mentioning that she needs an alibi for the night Lola was attacked. Arturo will connect the dots and determine that Mia went after Lola thinking she was Abby. He’ll be outraged and wonder why Mia thinks he’d help her.

The Young and the Restless spoilers say Mia confess her pregnancy. Although she believes the baby belongs to Rey Rosales (Jordi Vilasuso), the math still fits for Arturo. He’ll stomp away as Mia wonders what he’s going to do. At Crimson Lights, Paul Williams (Doug Davidson) will tell Christine Williams (Lauralee Bell) that Rey’s hiding something. He’ll hope to trip Rey up and crack Lola’s case.

At Sharon Newman’s (Sharon Case) place, she’ll get a shock when Rey comes clean about the attack. Rey will admit Mia’s to blame, but he halted his arrest when she revealed she was pregnant. He won’t want the kid to be born behind bars, but Paul’s revving up the pressure. Rey will note that he’s been assigned to pitch in on the case, so things are getting tricky now.

Back with Paul, he’ll get a visit from Nikki Newman (Melody Thomas Scott). She’ll want Paul’s assistance with Victor Newman’s (Eric Braeden) Nevada mystery, but he won’t be able to offer it. Fortunately, Nikki won’t give up. She’ll talk to Rey about Victor’s secrets and ask him to look into all this. The Young and the Restless spoilers say Rey won’t make any promises, but he’ll agree to mull it over.

Afterward, Paul will spy Arturo and Rey in a tense discussion. They’ll be on the same page about protecting Mia’s baby. Once Rey leaves Arturo, he’ll assure Paul that Mia was with her ex that night. Rey will lie that Arturo confirmed it and suggest that maybe Lola merely took a tumble. Naturally, Paul won’t buy that!

In a booth at the coffeehouse, Kyle will make an admission to Summer. He’ll point out that Phyllis tried to blackmail Jack with photos her private investigator took. Kyle will note that he was with Lola in the pics. The Young and the Restless spoilers state that Summer will fly into a rage over Phyllis’ move. She’ll maintain that no one is going to mess with what they have together.

Finally, Dina Mergeron (Marla Adams) will hear about Jack’s intentions at Jabot. She’ll believe Jack’s going to destroy John Abbott’s (Jerry Douglas) legacy, so Jack will have to listen up and decide if he wants to defend his plan. We’ll keep you posted as other Y&R details emerge. Stay tuned to the CBS soap and don’t forget to check CDL often for the latest Young and the Restless spoilers, updates, and news.