The Young and the Restless Spoilers: Lane’s Divorce Becomes A Reality – Lily and Cane Finished and Leaving Town? 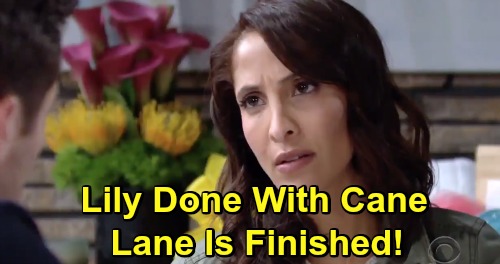 The Young and the Restless spoilers tease that Lily’s (Christel Khalil) plan to divorce Cane (Daniel Goddard) appears to have been given the go-ahead by Y&R. When realized, the end of Lane will fully sadden fans.

Hardcore viewers of the show, which include many supporters of this particular couple, had a bad feeling about Lane the moment they learned that Khalil was opting for recurring status. That decision was enmeshed with Y&R’s choice to have Lily be involved in the Hilary (Mishael Morgan) write-out.

Lily’s subsequent conviction and one-year prison sentence meant that she and Cane would be apart. It was clear from the start that their marriage, which had its problems in the past, would be tested again.

Sure enough, while Lily was adjusting to harsh realities at a distant correctional facility, Cane impulsed kissed Vickie (Amelia Heinle) more than once. That part of the plot felt pushed, as Mr. Ashby’s emotions were naturally affected by what happened to his wife and family, but he wasn’t off the rails.

Vindictive Billy (Jason Thompson) rushed to Lily, where he told her what Cane had done. Mr. Abbott was angered that his former step-sibling endangered the latest Villy revival attempt. Lily was wrecked as a result.

Credit to Y&R for writing a believable storyline, as Lily, being isolated, would become fatalistic where Cane was concerned. Her idea to move out of town after the divorce and her early release will need to be further detailed, as that would leave the twins with Cane, or splitting time with both parents?

As when Khalil announced her decision to work sporadically, Lane fans are also fearful of something more dramatic now happening. It could be that Y&R is not only ending Lane, but also writing out the Ashby family.

The above paragraph is purely speculative, based upon developments and one projected and hopefully avoided, collective plot path. It could be that all actors are retaining their current status, or even that Khalil returns to a regular contract in the near future.

Daytime devotees should know soon, as the heart-breaking episodes, where Neil (Kristoff St. John) passes away and St. John is honored, will be seen in late April. Those moments will immensely impact the Ashby’s and potentially change one, or more members Genoa City status.