The Young and the Restless Spoilers: Week of April 15 Preview – Summer’s Ready for Battle, Refuses to Let Lola Steal Kyle 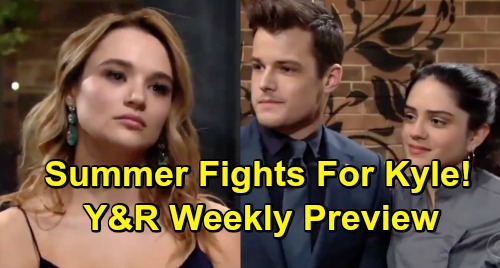 The Young and the Restless (Y&R) spoilers for the week of April 15-19 tease that Kyle Abbott (Michael Mealor) will remain stuck in his complicated love triangle. He was all set to break Summer Newman’s (Hunter King) heart, but he just can’t bear to do it. Kyle truly cares about Summer and her feelings. He’s trying to figure out a way out of this mess without hurting her, but that just isn’t possible.

Of course, Kyle also loves Lola Rosales (Sasha Calle) and doesn’t want to hurt her either. He’s caught between a rock and a hard place, so he’ll just keep stringing them both along for now. Nevertheless, Summer will soon get a little of her fire back. She’ll catch Kyle and Lola spending time together again, so she’ll naturally be fed up with her hubby’s constant need to be around his ex.

The Young and the Restless spoilers say Summer will have a serious and somewhat heated conversation with Kyle. She’ll insist that what they have is real and she’s not going to let anyone come between them – especially not Lola.

After all, Lola judged Kyle around the clock before she lost him. Now that Summer has locked Kyle in, Lola was willing to be the cheating homewrecker. Summer may have schemed her way into this marriage, but she believes the love she shares with Kyle is genuine. She may be right since Kyle can’t seem to bite the bullet and cut ties with her!

While Summer prepares for battle, Billy Abbott (Jason Thompson) will make a passionate speech about his love for Victoria Newman (Amelia Heinle). He’ll propose and hope Victoria agrees to become his wife, so he’s definitely ignoring her wishes about going slow. However, Billy can be awfully charming. He just might make a strong enough pitch and convince Victoria to begin this new chapter.

Other Y&R spoilers say Cane Ashby (Daniel Goddard) will fight for his relationship. After Lily Ashby (Christel Khalil) is released from prison, Cane will beg for a final shot at saving their love. He’ll suggest that he can be the man Lily married and wonder if she’ll give them one more try.

Unfortunately, the outcome isn’t looking hopeful here. The Young and the Restless spoilers hint that Lily wants different things out of life now, so Cane may have to accept that and let her walk away. It won’t be easy, but it may be what Lily needs to move on after her experience behind bars.

Y&R has another fantastic week ahead for fans. We’ll give you updates as other news comes in. Stay tuned to the CBS soap and don’t forget to check CDL often for the latest Young and the Restless spoilers, updates, and news.