The Young and the Restless Spoilers: Lily’s Fury Unleashed on Amanda – Christel Khalil’s First Airdate Back and What to Expect 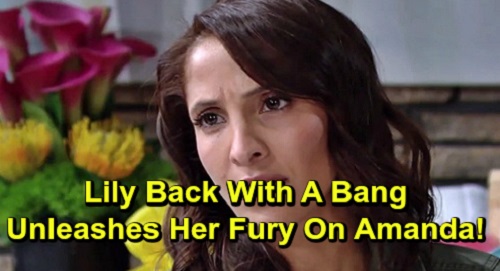 The Young and the Restless (Y&R) spoilers tease that Lily Winters (Christel Khalil) is set to make a big return by the end of the month. Her first airdate back will be October 25 according to Soap Opera Digest, so that’s something to look forward to. There’s no word on how long this visit will last, but it doesn’t seem like it’ll be a lengthy one.

However, Khalil has been open about her desire to remain a recurring player. She’ll pop in from time to time as long as the scheduling works out, so that’s great news. It’s always nice to see familiar faces again. For now, let’s focus on Lily’s next trip home. You can bet it’ll be an eventful one since there’s so much going on with Devon Hamilton (Bryton James).

This will drama is taking a toll on Devon, so Lily will undoubtedly worry. Elena Dawson (Brytni Sarpy) may confide in her and add to Lily’s concerns. Naturally, Lily will also interact with Cane Ashby (Daniel Goddard) regarding his part in the will chaos. If Cane’s involved in even a hint of shadiness, you can bet Lily will let him have it. At the very least, trust issues will resurface for these two.

Of course, The Young and the Restless spoilers say the most tension should come due to someone else’s presence in town. It’ll be interesting to see Lily’s reaction to Amanda Sinclair (Mishael Morgan). Lily should hear all about Amanda from Devon, but it’ll still be jarring to meet her face to face.

Y&R fans know Lily was distracted and caused the car crash that led to Hilary’s death. It should bring some strong emotions once Lily’s looking in Amanda’s eyes. It’ll feel like Hilary’s ghost staring back at her. Lily may have some tearful moments in private, but she’ll likely be tough as nails with Amanda – at least if this attorney keeps badgering Devon. She’ll be all about protecting him since he’s been through enough.