The Young and the Restless Spoilers: Manipulative Connor Plays Chelsea & Adam – Desperately Wants Parents Back Together

BY hellodrdavis on November 2, 2019 | Comments: one comment
Related : Soap Opera, Spoiler, Television, The Young and the Restless 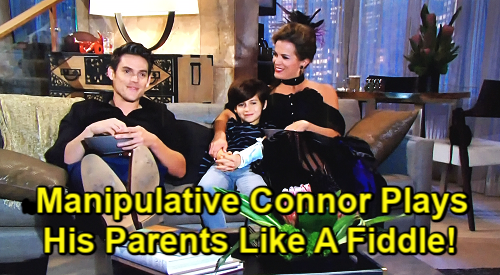 The Young and the Restless spoilers tease that Nick Newman (Joshua Morrow) has been pretty worried lately about Chelsea Lawson (Melissa Claire Egan). As Y&R viewers know, Nick and Chelsea were supposed to spend Halloween together with Connor Newman (Judah Mackey) and Christian Newman (Alex Wilson) at the Crimson Lights Halloween party.

The boys were going to go trick-or-treating and have some good family time together, but that all got upended when Adam Newman (Mark Grossman) called Chelsea and said there was a problem with Connor.

That led Chelsea to head to Adam’s place, where she wound up spending the entire evening. Of course, Nick wasn’t happy about this development, and he worried that Adam was using Chelsea’s love for Connor as a way to manipulate her.

That’s certainly a legitimate worry, especially since Adam indicated to Victor Newman (Eric Braeden) recently that he wanted to have Connor live with him permanently. It certainly wouldn’t surprise us if Adam used Connor to manipulate Chelsea into letting him stay there long-term.

But it doesn’t seem like Adam is being over-the-top manipulative here. Rather, it seems that Connor is the one doing most of the manipulating. Sure, he’s just a kid, but he’s a sharp little guy, and he seemed to know what he was doing when he refused to put on his Halloween costume and go have family time with Chelsea, Nick, and Christian. Connor really doesn’t seem to like Nick or Christian much – after all, he did lock Christian in the garage at Nick’s place.

But more importantly, Connor really seems to want his parents back together, and it seems that he’s playing both Chelsea and Adam to make that happen. Halloween was a good case-in-point – Connor helped finagle it so that his mom stayed to make popcorn, then stayed for the scary movie. He desperately wants his parents back together, and he’s shown that he’s willing to act out in order to make that happen.

Of course, none of this is to say that Connor hasn’t also experienced some serious emotional difficulties, too. He was clearly distraught when Adam left and when he thought that Victor had died. And he also experienced a great loss when Calvin Boudreau (John Burke) died as well. Those experiences probably left him feeling like he needed to make sure that the adults in his life stayed put in the way that he wants, and that’s probably why he’s being manipulative now.

But what effect will Connor’s actions have on his parents’ relationship? Chelsea and Adam will probably necessarily spend more time together now that Connor seems to be insisting on family time with them. And that means that Chelsea will be necessarily pulled away from Nick and Christian more and more. Could Connor ultimately be responsible for driving a wedge between Nick and Chelsea, too?

We think it’s likely that the Connor factor will lead to more problems for Nick and Chelsea going forward, especially if Connor decides to outright reject Nick and if he refuses to spend time with Chelsea unless it’s also with Adam. Do you think Connor will cause problems in Nick and Chelsea’s relationship? Stay tuned to the CBS soap and don’t forget to check CDL often for the latest Young and the Restless spoilers, updates, and news.