BY hellodrdavis on October 4, 2019 | Comments: one comment
Related : Soap Opera, Spoiler, Television, The Young and the Restless 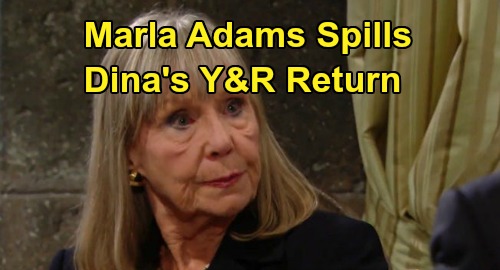 The Young and the Restless spoilers has some great news to pass on about a fan-favorite Y&R actress. Marla Adams, who portrays Dina Abbott Mergeron on the CBS soap, was recently interviewed by Soap Opera News (SON), and she had quite a bit to say about her long and remarkable career, as well as about what’s next for Dina on the show.

Marla revealed the reason why Y&R viewers haven’t seen much of her lately on the show – she recently underwent heart surgery and wasn’t physically able to film. But she reported in the interview that she has since resumed filming and that there’s some good Dina drama coming up later in October and in December.

In fact, Marla sated that exciting things will be happening with the character, along with some surprises that Dina will be involved with. Could this have to do with the book that Traci Abbott (Beth Maitland) and Jack Abbott (Peter Bergman) are embarking on? There is certainly a lot of Abbott family history that they’ll be exploring, and they might share what they’re working on with Dina.

Y&R viewers will remember that Dina absolutely loved it when Traci shared the contents of her most recent novel about “Flynn” and “Velma.” Dina loved the intrigue and romance of the story, and while her Alzheimer’s will surely prevent her from contributing to the Abbott family story directly, perhaps Traci and Jack can share their progress with her as they work on their book. Dina would surely adore hearing about the whole thing.

Of course, Dina recently had a beautiful moment with Jack, during which Jack told her that he forgave her for leaving the family and that he finally appreciated what she must have been feeling as a young, ambitious woman with a mind for business, but living in an era when women with young children didn’t typically work outside the home. Dina suddenly recognized Jack and told him that she loved him, which brought tears to many viewers’ eyes.

Will we see more touching scenes between Dina and Jack, or perhaps between Dina and Traci? Y&R viewers would surely welcome such scenes, as would Marla. “It’s an absolute joy to work with everyone,” she said during the SON interview. “The whole secret of acting is not to memorize your lines. It’s to feel the depth of what is not said between the lines and to respect what you are doing.”

Well, Marla certainly does exactly that, much to viewers’ delight. Are you excited to see more Dina scenes in the coming weeks? Stay tuned to the CBS soap and don’t forget to check CDL often for the latest Young and the Restless spoilers, updates, and news.