BY Annemarie LeBlanc on April 14, 2019 | Comments: one comment
Related : Comings & Goings, Soap Opera, Spoiler, Television, The Young and the Restless 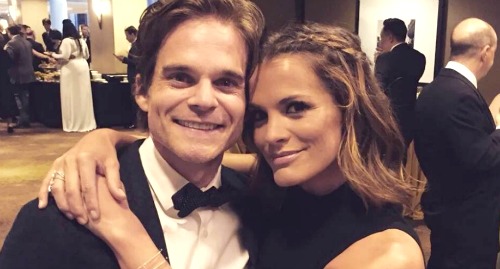 Recent, confirmed news has Grossman becoming the Adam recast, along with Rikaart reviving his Y&R role. Continuing the Adam story is welcome news to fans of the show and, of course, Rikaart’s new contract is pleasing, as that great actor has long been a favorite of devoted Genoa City observers.

But what about Chelsea? If Adam is returning, and he is, and Kevin is coming back to town, then Egan’s alter ego would also seem to be a natural reboot fit.

Egan’s post might simply have been a highlight of her personal friend’s (Rikaart) birthday celebration. But it’s fair to speculate that a wink at the fans was also implied, as many social media savvy actors enjoy staying in touch with their fans and giving them early information when they’re able to do so.

As of mid-April, Egan’s twitter photo with Rikaart remained her most recent visual post. That’s at least an interesting point.

Adam and Chelsea makes sense, more so if she will be directly involved in whatever his latest comeback story will be. Yes, Chelsea and Connor (Gunner and Ryder Gadbois) might not return when Adam does, as they could always reunite with him at any later point. However, tying Adam’s latest Genoa City revival to the entire Chadam family’s return would be most fitting.

As Y&R fans recall, Egan’s character suddenly seemed to revert to the grifter she’d been upon her debut in 2011. That didn’t make sense in the context it was presented, as her actions were unexplained and were written open-ended.

What if Chelsea gathered her stored stash of money from the penthouse walls, as Arturo’s (Jason Canela) crew’s work allowed Nick (Joshua Morrow) to learn, because she was taking her son to see Adam? The emotional trigger that sent Chelsea out of town must have been driven by something, or someone.

A great fill-in-the-blanks return arc would have Chelsea having left town last year because Adam contacted her. So she took Connor, the money and dashed to wherever Adam was living.

Kevin’s return ties to Adam’s revival because of Mr. Fisher’s link to Chloe (Elizabeth Hendrickson). General Hospital has Hendrickson under contract. So unless news breaks about Margaux’s exit, or a recast of that character happens, Kevin will represent the Fisher family when he returns. Though a Chloe recast can’t be ruled out.

Chloe conked Chelsea over the head when Egan’s character discovered what Chloe had done to Adam at the cabin. Chelsea still believes that Chloe later died, which Kevin knows isn’t true. So, along with all things Adam Newman, the tension between Chelsea and Kevin is just another reason to have Egan return to Y&R now as well.

Do you want to see Chelsea back in Genoa City? CDL is a leading source for everything linked to The Young and the Restless. Check back regularly for Y&R spoilers and news!

Happy Bday to one of my favorites!!! @gregrikaart ❤️ pic.twitter.com/MrRH9PqcWj