The Young and the Restless Spoilers: Adam Newman Being Treated by Victor’s Secret Psychiatrist – Tries To Cure Amnesiac Son? 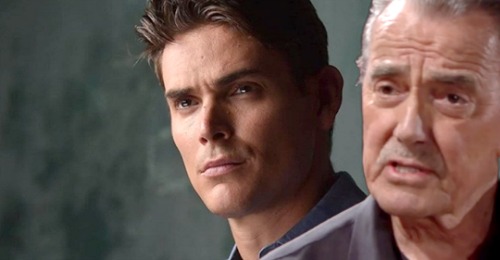 The Young and the Restless (Y&R) spoilers tease that Victor Newman (Eric Braeden) is keeping some big secrets from his family. On Monday, Nikki Newman (Melody Thomas Scott) will learn that Victor deceived her about his recent business trip. She’ll decide to take matters into her own hands since she’ll be fed up with all the lies.

Victoria Newman (Amelia Heinle) will remain curious about what her dad’s up to, so she’ll join Nikki as they search Victor’s office. The Young and the Restless spoilers say their mission will prove successful when an intriguing clue appears. It’ll be a bill for a psychiatrist just outside of Las Vegas, Nevada.

Of course, Victor was recently spotted in the area, so it’s clear that his mysterious meetings tie in with this. Nikki and Victoria won’t think Victor would hire a shrink for himself, and we agree with that. Vic must be paying this shrink to treat someone else, so Adam Newman (Mark Grossman) might be a good fit. Y&R fans know Adam will be headed back to CBS soap in the near future.

Perhaps Victor secretly found Adam, who may be battling amnesia. That would explain why Victor’s paying a psychiatrist. This shrink may have been tasked with talking to Adam and trying to stir up old memories. The trauma of what Adam’s been through might be blocking his true self from shining through.

When Victor comes home, Nikki will undoubtedly confront her husband with the psychiatrist bill. She’ll inevitably demand an explanation for Victor’s lies and this weird shrink situation. Will Victor make a confession? Will he rock Nikki with the news that Adam is alive, but can’t recall the man he used to be? A bombshell like that would certainly shake things up for the Newman family.

The Young and the Restless spoilers say Victor will have to come clean eventually, so let’s hope Nikki pries the truth out of him soon. Are you looking forward to Adam’s return and all the drama it’ll bring? We’ll give you updates as other Y&R details emerge. Stay tuned to the CBS soap and don’t forget to check CDL often for the latest Young and the Restless spoilers, updates, and news.