The Young and the Restless Spoilers: Mariah and Tessa Attacked With A Brick – Discover Threatening Message From Violent Enemy 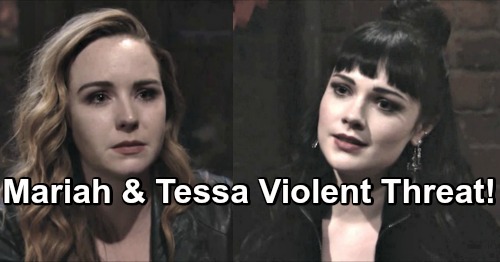 The Young and the Restless (Y&R) spoilers tease that danger is headed to Genoa City. Y&R fans know that Mariah Copeland (Camryn Grimes) and Tessa Porter (Cait Fairbanks) already went through a dangerous nightmare late last year. Some thugs demanded $20,000 from Tessa after they helped her smuggle Crystal Porter (Morgan Obenreder) into Canada, which led to some scary moments.

When Tessa couldn’t pay fast enough, she was left battered and bruised at the coffeehouse. Mariah was later followed in her car and faced some breathy hang-up calls. That convinced terrified Tessa to end this once and for all, so she blackmailed the cover-up crew to keep Mariah safe and started a whole new nightmare.

Y&R tends to brush Tessa’s desperate reason for needing quick cash under the rug, but it may come back into play during the week of April 15-19. When a brick smashes into the window of “Teriah’s” home-away-from-home Crimson Lights, that old threat might cross Tessa’s mind. She may worry that the thugs are back to stir up more trouble.

Surprisingly, it doesn’t look like this will actually be connected to Tessa. When the girls examine the brick, they’ll find a disturbing message attached to it. The Young and the Restless spoilers hint that Mariah is the real target here. Since she’s the host of GC Buzz, Mariah could easily have a stalker or perhaps have become well-known enough to revive something from her own shady past.

Tessa will freak over this mysterious threat and what it could lead to, but Mariah will try to downplay the drama. She’ll insist it’s nothing to fret about, but she won’t be able to keep up this act for long. The Young and the Restless spoilers say Mariah will ultimately confess her fears. She’ll feel like someone’s out to get her, so maybe there have been other incidents she’s neglected to mention.

Later, Mariah and Tessa will pay Sharon Newman (Sharon Case) a visit. They’ll discuss what Mariah might be up against, so you can bet Sharon will be just as concerned. It’s good that this doesn’t seem to be Tessa-related since that’ll be one less thing she can be blamed for! Tessa hasn’t done anything worse than anybody else in Genoa City, so it’s time to cut her some slack and let her live her life.

However, the three of them will still want to get to the bottom of all this. Since Sharon is now dating Rey Rosales (Jordi Vilasuso), he may be able to help. Sharon will certainly be determined to protect her daughter, so Rey might promise to look out for Mariah and see what he can discover.

The Young and the Restless is delivering some solid mysteries lately, which is fantastic news. It’s always fun to put the clues together and have them build to big surprises, so stay tuned for some twists and turns. We’ll give you updates as other Y&R details emerge. Stick with the CBS soap and don’t forget to check CDL often for the latest Young and the Restless spoilers, updates, and news.