BY Heather Hughes on March 1, 2019 | Comments: one comment
Related : Soap Opera, Spoiler, Television, The Young and the Restless 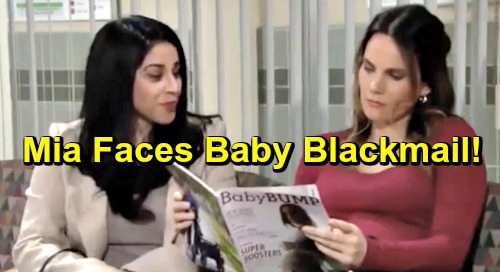 The Young and the Restless (Y&R) spoilers tease that Mia Rosales’ (Noemi Rosales) sneaky move could come back to haunt her. That pregnant woman she ran into really came in handy, but was that the last will see of her? It doesn’t take a genius to guess why Mia presumably asked this lady for a urine sample. This woman had to know Mia was going to fake a pregnancy of her own.

Will Mia’s helpful partner in crime turn out to be a major threat instead? Since the pregnant woman had a mountain of bills spilling out of her purse, she’s obviously strapped for cash. The fact that she even went for a scheme like this proves she’s willing to do anything for money.

Mia probably paid quite a bit as part of their deal, but what’s to stop this lady from tracking Mia down and demanding more? Y&R fans know Genoa City isn’t that big of a town. People run into each other all the time, especially at hotspots like Crimson Lights. Mia and Rey Rosales (Jordi Vilasuso) live in the apartment above the coffeehouse, so maybe this woman could bump into Mia downstairs.

If not, there’s always the athletic club or anywhere else on canvas. All it would take is a glimpse of Mia and an opportunity to follow her home. This lady might blackmail Mia in hopes of securing more money and a brighter future for her kid. She could threaten to tell Rey the truth and raise suspicions about that fake bun in the oven.

Even if Mia denied it, Rey probably wouldn’t send her into the bathroom alone next time! Another pregnancy test would seal Mia’s fate, so she’ll want to avoid that scenario if at all possible. Mia will want to keep this plot going any way she can. She’ll undoubtedly try to get pregnant ASAP, but this woman could lead Rey to take a closer look at Mia’s due date if that happens.

In other words, this random pregnant lady could blow everything for Mia if she reenters the picture. She would have all the power, so Mia may have to cave in on whatever she wants – including astronomical amounts of money. The Young and the Restless viewers will be eager to see if this lady indeed presents a problem.

How to you think Mia will ultimately get caught faking a pregnancy? Could the woman who helped her pull it off play a part? The Young and the Restless spoilers say some exciting scenes are coming up, so we’ll give you updates as other Y&R news emerges. Stay tuned to the CBS soap and don’t forget to check CDL often for the latest Young and the Restless spoilers, updates, and news.