The Young and the Restless Spoilers: Mia Fakes Miscarriage – Rey Will Be Crushed?

BY Sean O'Brien on March 2, 2019 | Comments: one comment
Related : Soap Opera, Spoiler, Television, The Young and the Restless 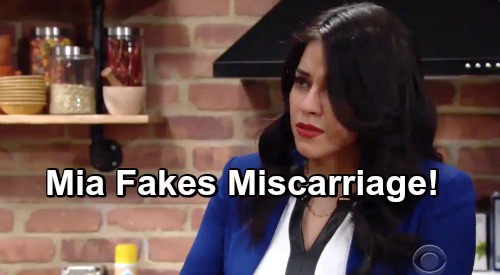 The Young and the Restless spoilers tease that Mia (Noemi Gonzalez) has a limited number of options. She faked a pregnancy test in order to make Rey (Jordi Vilasuso) believe that Ria is having its first child. One of her despicable options could first devastate Rey and eventually cause him to be outraged.

An actual pregnant woman just so happened to walk into one of the waiting areas at Genoa City Memorial Hospital. It was somewhat illogical for that extra to be written to a location other than a pregnancy-focused section of the health campus, but that soapy point pushed this part of the storyline.

So Mia paid the actually expectant mother for some of her genetic material, which was stored in an apparently available carrier that was taken back to the apartment above Crimson Lights. Anticipating Rey’s demand for proof, Mia then used the solicited substance to create a positive test result.

The mix of feelings on Rey’s face was tough for the audience to watch, as devoted viewers knew his mind and heart were being fully manipulated. They were also fixed upon what Mia will do next.

The truth could be offered, meaning that Mia comes clean. Of course that would result in Rey being able to throw the legal book at her, potentially resulting in his wife going to jail for attacking Lola (Sasha Calle). So this path will almost certainly be avoided until she’s forced to admit reality.

Mia could try to get pregnant from Rey, or another man. But there would be no guarantee. And she won’t be able to fake actually being pregnant far past April, at best.

Mrs. Rosales could leave town. But she believes this situation can be controlled. Along with that assessment another truly diabolical option exists.

In order to garner Rey’s enduring sympathy, Mia could pursue a false miscarriage. If that occurs viewers will become even more opposed to this character then they are now. But to Y&R’s credit, the show will have positioned the fine actor who’s portraying Mia as an even deeper villain.

Rey will be outraged whenever he eventually learns that Mia lied to him. If this ruse extends for many weeks, or months, he’ll also be unable to report her illegal actions, in having attacked Lola, who she thought was Abby (Melissa Ordway). Though Rey could do so if he was prepared to surrender his badge.

The worst followup scheme Mia could pursue, meaning a miscarriage claim, would initially devastate her husband. That choice, more than any other, would permanently damage Rey’s love, not just his trust. Ria’s troubled marriage would also end.