The Young and the Restless Spoilers: Mia Fears Miscarriage After Conflict Erupts – Blames Sharon for Danger to Baby Rosales 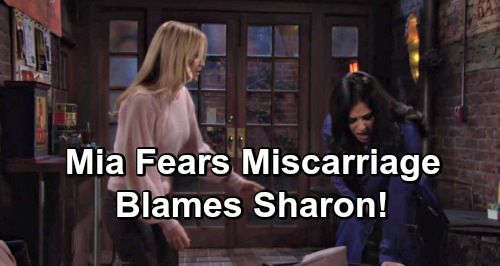 The Young and the Restless (Y&R) spoilers tease that Sharon Newman (Sharon Case) and Mia Rosales (Noemi Gonzalez) will get into a heated argument. They’ll cross paths at Crimson Lights on Monday, April 8, so Y&R fans should be prepared for flying insults. Now that Sharon’s dating Rey Rosales (Jordi Vilasuso), they won’t even try to hide their disdain for each other.

Sharon will naturally bring up that ultrasound photo that Mia left for Rey. She’ll think it was an obvious sabotage ploy and potentially doubt that Mia’s even really pregnant. Sharon may contend that a woman like Mia can be awfully resourceful. Of course, she can work the paternity angle as well. Sharon may suggest that Mia goes from brother to brother so much that Rey can’t be sure of anything.

Mia indeed slept with Arturo Rosales (Jason Canela), but she’ll think Sharon’s the real problem here. She may contend that she wouldn’t have had to look elsewhere for attention if Sharon hadn’t been taking up all of Rey’s. That’s when this Young and the Restless showdown will get kicked up a notch.

After Sharon implies that Mia’s too out of control for a stable guy like Rey, Mia will think he’s found the opposite problem with Sharon. She’ll suggest that Sharon is “meatloaf and mashed potatoes and asleep by 9:00.” Before Sharon can reply, Mia will clutch her abdomen in severe pain. She’ll steady herself on a nearby table as she cries out, so an alarmed Sharon will undoubtedly get her some help.

There could have been a chance Mia’s faking it, but the sudden nature of this burst of pain makes it seem genuine, which it is. It’ll genuinely appear to catch Mia off guard. That means the baby exists as fans will see on new Y&R episodes the week of April 8-12. However, it also means Mia could end up having a miscarriage.

No matter how this plays out, you can bet Mia will blame Sharon for this. She can tell Rey all about how Sharon provoked her and upset her to the point of losing his child. Since Rey knows how Mia operates, he may not buy her version of events. Rey understands that Mia is highly confrontational, so he might argue that if anyone’s to blame, it’s Mia herself.

Will Rey turn Mia in for the attack on Lola Rosales (Sasha Calle) if she’s carrying Arturo’s baby? The Young and the Restless spoilers say Rey may have to reevaluate the situation soon enough! We’ll give you updates as other Y&R news comes in. Stick with the CBS soap and don’t forget to check CDL often for the latest Young and the Restless spoilers, updates, and news.