BY hellodrdavis on April 22, 2019 | Comments: 2 comments
Related : Soap Opera, Spoiler, Television, The Young and the Restless 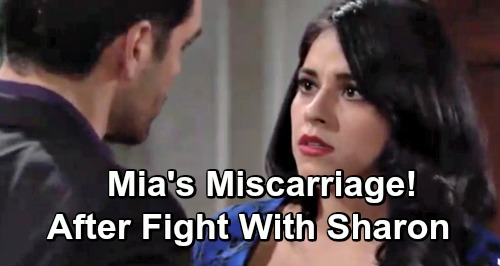 The Young and the Restless spoilers tease that Mia Rosales (Noemi Gonzalez) will be feeling the pressure from all angles. She’s gotten herself into quite a predicament with the Rosales brothers. She’s estranged from Rey Rosales (Jordi Vilasuso), who’s now with Sharon Newman (Sharon Case), and her relationship with Arturo Rosales (Jason Canela) is strained as well. She’s pregnant, and nobody knows whether Rey or Arturo is the father.

That would be more than enough stress for a pregnant woman to endure, but Y&R spoilers say that Mia will undergo several more stressful situations in the coming days. For starters, she’ll encounter Abby Newman’s (Melissa Ordway) wrath when Abby learns that Mia’s pregnant and the baby could be Arturo’s. Abby will promptly throw Mia and Arturo out of her new restaurant.

Of course, this will be humiliating for Mia, whose main goal ever since she arrived in Genoa City is to fit in with the town’s high society. Mia’s blood will boil, and that won’t be good for the baby. And according to Y&R spoilers, Mia will get threatened by Rey later that evening.

Rey’s got major leverage against Mia right now. He knows that Mia is the person who attacked Lola Rosales (Sasha Calle), thinking she was Abby. Rey could put Mia away for a long time and virtually ensure that she has her baby in prison, and Mia knows it. Mia won’t be happy when Rey blackmails her and insists that she behave herself or else he’ll turn her in for her crime.

Of course, Rey will be headed off to Las Vegas to investigate Victor Newman (Eric Braeden) for a while, so Mia may think she’s getting a reprieve from all the stress. But according to Y&R spoilers, Mia will decide to cause trouble with Sharon and provoke an argument while Rey is away.

Mia and Sharon will spar on at least one occasion while Rey is in Las Vegas, and this just won’t be smart on Mia’s part. She’s in a position of weakness with Rey and Sharon, and provoking arguments isn’t what she or her baby needs right now. It looks like she’ll get all worked up during her spat with Sharon.

And this leads us to a critical question: Will Mia’s pregnancy ultimately survive? Of course, Y&R fans know that Noemi Gonzalez is soon leaving the show and has finished up filming, so Mia’s on her way out. One possibility is that the baby will turn out to be Arturo’s, and both Arturo and Mia will leave Genoa City.

But there’s another possibility, and that’s that Mia could lose the baby. She’s certainly under enough stress right now to cause a miscarriage, especially if she provokes situations and makes things worse on herself than they need be. It would also cause some soapy drama if Mia were to miscarry after/during a fight with Sharon, so that’s a possibility, too.

We’ll see exactly what happens, but something’s got to give to resolve Mia’s storylines, and a miscarriage would certainly be one way to do that. Do you think Mia will lose the baby? Stay tuned to the CBS soap and don’t forget to check CDL often for the latest Young and the Restless spoilers, updates, and news.