The Young and the Restless Spoilers: Monday, April 15 – Victoria Comes Clean to Billy – Jack Gets Ahead of Ashley

BY Heather Hughes on April 12, 2019 | Comments: one comment
Related : Soap Opera, Spoiler, Television, The Young and the Restless 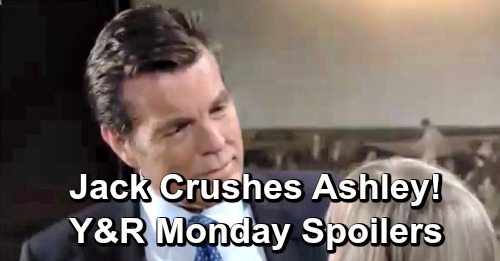 The Young and the Restless (Y&R) spoilers for Monday, April 15, tease that Victoria Newman (Amelia Heinle) will confide in Billy Abbott (Jason Thompson). He feared she was on a downward spiral when she decided to live it up in Las Vegas, so he quickly intervened. Now Billy’s won Victoria over and their romance is on the right track. As they grow closer, Victoria will feel more comfortable opening up.

Y&R fans can expect a confession from Victoria. Since she’s still dealing with a lot of J.T. Hellstrom (Thad Luckinbill) trauma, this could be related to him. Victoria may admit she still harbors plenty of pain and anger toward her ex. It’d be perfectly reasonable for her to feel that way. J.T.’s brain tumor doesn’t change the fact that Victoria was abused and went through a nightmare because of him.

Whatever the case, Victoria’s safe now. Billy will assure Victoria of that and hope he can keep making her feel secure for the rest of her days. He’ll have no intention of letting Victoria slip through his fingers again. Billy feels like they have the kind of love that’s meant to last, so he’ll be determined to make this reunion the one that sticks.

The Young and the Restless spoilers say Billy will put together a romantic evening for Victoria soon. He’ll pamper her a bit before proposing at some point this week. This is happening far too quickly, but there’ll be no stopping Billy. He knows what he wants now and that’s Victoria.

Over with Jack Abbott (Peter Bergman), he’ll gear up for the next round of battle. Ashley Abbott (Eileen Davidson) has certainly played some dirty tricks lately. She used Dominique Caroll (Alice Hunter) to swipe all Jabot’s new patents and products. Ashley also stole Jack’s lifestyle brand idea and forced him to make an expensive deal.

However, Jack may come roaring back with some new strategies. He’s been letting Ashley gain the upper hand time and time again. Perhaps it’ll finally be Jack’s turn to gain an advantage on Monday’s Y&R episode. The Young and the Restless spoilers say this war will definitely heat up!

It sounds like some terrific scenes are coming up. We’ll give you updates as other Y&R news emerges. Stay tuned to the CBS soap and don’t forget to check CDL often for the latest Young and the Restless spoilers, updates, and news.