BY hellodrdavis on December 23, 2019 | Comments: one comment
Related : Soap Opera, Spoiler, Television, The Young and the Restless 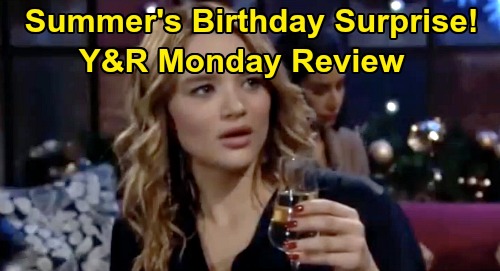 Theo will wonder if anyone else is joining them, but Jack and Traci will say that they wanted it just to be the three of them. Theo will wonder about Kyle Abbott (Michael Mealor), and if they didn’t invite him for a reason. Jack and Theo will talk a little business, and it turns out that Theo’s big meeting was a success. Jack will tell Theo that he’s pleased and that the staff loves working with him…which is something Kyle had neglected to mention to Theo.

Jack and Traci will give Theo a copy of the Abbott memoir, and they’ll share sweet stories about Abbott and Vanderway holiday traditions. Theo will have brought a traditional Vanderway family treat to share, which Jack and Traci will love. Traci will note how happy she is that Theo and his dad were raised with so much love.

Jack and Traci then extended an invitation to Theo to spend Christmas Day with them and the rest of the family. Theo said he’d think about it, and Traci made sure to let Theo know that he was welcome there. The three enjoyed their treats and had a good time together.

Next, on the new episode of Y&R on Monday, December 23, Kyle will arrive home to find Lola Abbott (Sasha Calle) baking cookies. Lola will notice that Kyle has pine needles on him, and he’ll confess that he had a slight issue getting their Christmas tree. Lola will eventually open the front door and notice a massive tree stuck out in the hallway. Clearly, he was shopping for an Abbott sized tree.

They’ll eventually get the tree inside the apartment, and they’ll then open a box that came earlier. It will be from Jack and Celeste Rosales (Eva LaRue) and will contain their first Christmas ornament as a married couple along with some of their childhood ornaments. They’ll talk about starting their own traditions, kiss, and make love, then gush about how they have everything they could ever want.

Meanwhile, at Society, Phyllis Summers (Michelle Stafford) will heartily greet Summer Newman (Hunter King), announcing to the restaurant that it’s Summer’s birthday. They’ll both be in good spirits and will have an easy conversation over Champagne and a nice dinner. They’ll touch on Summer’s relationships with Kyle and Theo, and on Phyllis’ broken friendship with Adam Newman (Mark Grossman), but for the most part the conversation will stay light.

Phyllis will note what a fighter Summer is, and she’ll be touched that Summer had a decorated Christmas tree put in her suite at the Grand Phoenix. Phyllis will give Summer some beautiful earrings for her birthday and they’ll hug happily, clearly enjoying their time together as mother and daughter.

Phyllis will then step away to check on dessert, and Summer will get cursory birthday texts from Jack and Theo, but she’ll get a lengthy text from Kyle about being friends for life and signed with an “xx.” That will prompt a big smile from Summer, and she and her mother will enjoy dessert as Phyllis says that Summer is the best early Christmas present she ever got.

Next, Nick Newman (Joshua Morrow) and Victoria Newman (Amelia Heinle) will be at the ranch with Victor Newman (Eric Braeden) and Nikki Newman (Melody Thomas Scott) to do a little celebrating before Billy Abbott (Jason Thompson) and Victoria leave for Telluride on vacation. They’ll have various conversations about the kids and Christmas plans, and Billy will enter the room just as Victoria is saying that all of the things haunting and hurting them are behind them. He’ll seem disturbed by the statement.

Later, Billy will seem distracted as Victor wants to talk about Billy’s new consulting gig, which is for MacGruder International, a company that Victor knows about. Talk will turn to how Billy will manage work and home responsibilities, and Billy will seem put off by the whole thing. Suddenly Amanda Sinclair (Mishael Morgan) will text with her version of “word of the day,” which Billy will glance at briefly.

Victor will take a few moments to comment on how happy he is with his family – Victoria carrying on the family legacy at Newman, and Nick having Christian Newman (Alex Wilson) back and working on New Hope. He’ll then turn to Nikki and say that she’s most important to him, referring her past health problems and her support through the ordeal with his disease. He’ll then play Silent Night and he and Nikki will dance.