The Young and the Restless Spoilers: Monday, January 21 – New Promo – Billy Gets To Lilly Before Cane – Mia Flirts With Arturo 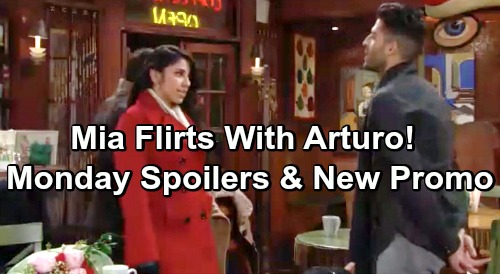 The Young and the Restless (Y&R) spoilers and promo preview video for Monday, January 21, tease that Cane Ashby (Daniel Goddard) will have to rely on a backup plan. Devon Hamilton (Bryton James) will refuse to let Cane use his jet to go see Lily Ashby (Christel Khalil). He’ll stand his ground on that since confessing about the kiss would only bring Lily pain.

However, Cane won’t be able to handle his guilt. He’ll also worry about the news getting back to Lily, so he’ll just want to be honest about what went down with Victoria Newman (Amelia Heinle). The Young and the Restless spoilers say Cane will hop in his car and floor it to the prison. He’ll break pretty much every possible law as he tries to get over there.

When Cane arrives, he’ll learn Lily’s already meeting with a visitor. She’ll be speaking with Billy Abbott (Jason Thompson), who’s set to reveal a big secret. It sounds like Billy will deliver this kissing bombshell and completely wreck Cane’s marriage. Cane will punch Billy over all this eventually, so stay tuned for serious drama.

Speaking of serious drama, Phyllis Summers (Gina Tognoni) will fear that’s what’s ahead for her. She believe Victor Newman (Eric Braeden) poses a threat to her freedom. Since Victor always has so much power over his family and Nikki Newman (Melody Thomas Scott) needs to be protected, Phyllis won’t think any of the Newmans can be trusted.

The Young and the Restless spoilers say Phyllis will lure Sharon Newman (Sharon Case) to Jabot for a fake catering meeting. She’ll surprise Sharon by revealing that this is actually about J.T. Hellstrom (Thad Luckinbill) and who’s going to go down for his death. Phyllis certainly won’t want it to be her!

As a result, Phyllis will do everything in her power to make Sharon see Nikki, Victoria and Victor as the real enemies. She’ll even think Nick Newman (Joshua Morrow) could be included in that group. While Phyllis pushes Sharon toward a desperate plan of attack, Mia Rosales (Noemi Gonzalez) will push something else – Arturo Rosales’ (Jason Canela) buttons. Y&R fans know how Mia operates!

Arturo will buy flowers for Abby Newman (Melissa Ordway) and try to make her feel special. That’ll earn some snarky comments from Mia. She’ll think Arturo’s just trying to make himself feel better about what happened the other night. Arturo will suggest that there was no “other night” as far as he’s concerned. He’ll insist that he wants a future with Abby and that’s that.