BY Heather Hughes on January 17, 2019 | Comments: one comment
Related : Soap Opera, Spoiler, Television, The Young and the Restless 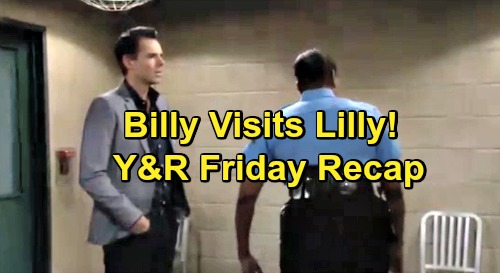 The Young and the Restless (Y&R) spoilers for Friday, January 18, tease that Nikki Newman (Melody Thomas Scott) will be taken aback by the identity of her “intruder.” It’ll just be Victor Newman (Eric Braeden) coming home after his bail hearing was moved up. Victor will show off his ankle bracelet and plan to be on his best behavior. He’ll assure Nikki that his main concern is protecting her.

Over with Kyle Abbott (Michael Mealor), he’ll have a surprise for Lola Rosales (Sasha Calle). Kyle will offer a sweet gift, but don’t worry. Kyle wouldn’t dare spend more than $19.95! That’s how much it cost him to get a star named after them – “Kola.” Lola will appreciate this far more than that $5,000 handbag, so their love story will keep going strong…with one little exception. 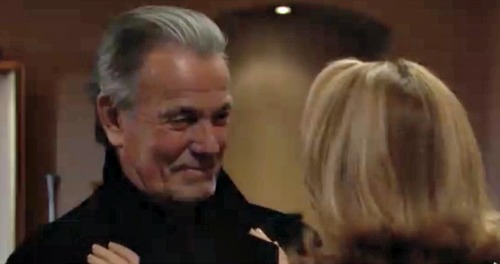 The Young and the Restless spoilers say Kyle will seem frustrated after their intense make-out session. Lola wants to wait on having sex, but that’s becoming tougher and tougher for Kyle. Nevertheless, Kyle will hang in there and focus on how much he cares about Lola for now.

Across town, Billy Abbott (Jason Thompson) will walk in on Cane Ashby (Daniel Goddard) and Victoria Newman (Amelia Heinle) kissing. He’ll fly into a rage and accuse Cane of taking advantage of her. Once Cane dashes off, Billy will suggest that he doesn’t judge Victoria for this. He’ll feel like she just reacted to Phyllis Summers’ (Gina Tognoni) attempt to stir the pot, so he’ll understand.

Of course, Victoria and Billy’s reunion isn’t official yet. They’re just trying to figure out if this can work, so Victoria won’t think she owes Billy an explanation. She’ll rant about Phyllis, but Billy will promise Victoria wasn’t a backup plan. He’ll hope they can still have a bright “Villy” future.

Victoria will wonder if Billy would feel that way if Phyllis has said yes to getting back together. Billy won’t think that matters. It’s hypothetical, so he won’t really answer the question. Unfortunately, Victoria will take that as a sign of trouble. During their argument, Victoria will come clean about kissing Cane previously. She’ll tell Billy to leave, so it appears their reunion’s been derailed for the time being.

Back with Cane, he’ll be a mess at Devon Hamilton’s (Bryton James) penthouse. Cane will plead to use Devon’s jet and confess everything to Lily Ashby (Christel Khalil). He’ll hope he can save his marriage. Devon will be stunned when Cane admits to locking lips with Victoria, but he won’t think confessing is the right call. He’ll suggest that Lily’s dealing with enough as it is.

Unfortunately, Y&R spoilers say Billy will show up for a prison visit with Lily. It looks like his vengeful tattling could cause a whole lot of drama! At the ranch, Nick will join Nikki and Victor. They’ll discuss all the planted evidence and tormenting that’s been going on. Victor will want to find out who’s responsible, but he’ll think it’s best if they get rid of all the proof.

Nikki, on the other hand, will think that’s a terrible idea. If worst comes to worst, she’ll want to use all this to keep Victor free. Afterward, Victoria will arrive for this mini family reunion. She’ll tell Nikki about her Billy troubles and admit she isn’t sure what she wants.

Back with Victor, he’ll tell Nick that his house arrest will keep him on site. Victor will hope they can work together and catch the person targeting the Newman clan. The Young and the Restless spoilers say Nick will gladly pitch in, but more chaos is brewing. We’ll give you updates as other news comes in. Stick with Y&R and don’t forget to check CDL often for the latest Young and the Restless spoilers, updates and news.