The Young and the Restless Spoilers: Monday, January 7 – Victor Shuts Down Nikki’s Confession with His Own

BY Heather Hughes on January 4, 2019 | Comments: one comment
Related : Soap Opera, Spoiler, Television, The Young and the Restless 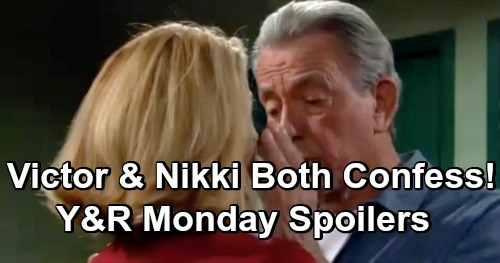 The Young and the Restless (Y&R) spoilers for Monday, January 7, tease that Nikki Newman (Melody Thomas Scott) will be reunited with her husband again. On Friday’s episode, Nikki signs out of the hospital against Dr. Nate Hastings’ (Brooks Darnell) orders and puts her name on the list to see Victor Newman (Eric Braeden). Nikki’s got something to say and Victor needs to hear it ASAP.

Rey Rosales (Jordi Vilasuso) may put up a fight on Monday’s new Y&R episode, January 7, but Nikki will manage to score that visit. She’ll embrace Victor at in the visiting area and push him to listen to her. Nikki will still seem weak from her hospital stay, which is understandable since she was near death just a few days ago. She’s got a long way to go in her recovery.

Victor will scold Nikki for leaving the hospital and refusing to listen to Nate, but he’ll get that she’s worried about him, too. The Newmans are all stuck in turmoil right now!

Victor will push Nikki to at least go home and get some rest, but she’ll want to make an admission first. She’ll declare that she knows who killed J.T. Hellstrom (Thad Luckinbill). Nikki will think it’s time for Victor to hear the truth.

Y&R spoilers say Victor will gently hold Nikki and attempt to shut this confession down. It’s risky to be talking about this at all. Victor won’t want Nikki to ever repeat those words again. Of course, Nikki will keep at it anyway. She’s awfully stubborn, so it won’t be easy to change her mind.

That’s when Victor may spell it out for Nikki. He’ll probably tell her he already knows the details of that fateful night in April. Victor has likely been doing whatever he could to protect the cover-up posse behind the scenes.

From now on, Victor won’t want Nikki to worry about anything. He’ll vow to take care of this for her, so they’ll come to an understanding. Nikki may agree to keep her mouth shut and trust that Victor can make this go away. Thankfully, Victor has plenty of experience with that!

Other Young and the Restless spoilers say Sharon Newman (Sharon Case) will be on edge. It looks like a minor slip-up will leave Rey more curious than ever. This could be as simple as being overly anxious or accidentally suggesting something she shouldn’t really know. Regardless, Rey will decide to keep a close eye on Sharon. He’ll grow increasingly suspicious and that’s bound to bring trouble.