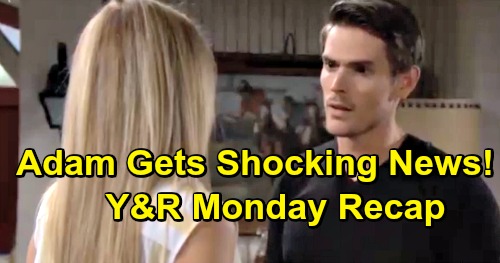 The Young and the Restless (Y&R) spoilers and recap for Monday, June 3, tease that Victoria Abbott (Amelia Heinle) and Billy Abbott (Jason Thompson) will finish up the details on their recommitment ceremony invitations. Before sending them, they’ll chat with Traci Abbott (Beth Maitland) briefly and discuss Adam Newman’s (Mark Grossman) next move.

Billy will feel like Adam’s going to pull something sneaky. However, Victoria will admit she believes Adam’s desire to reconnect with Chelsea Newman (Melissa Claire Egan) and Connor Newman (Gunner and Ryder Gadbois) is genuine. At the tack house, Sharon Newman (Sharon Case) will have some bad news for Adam. She’ll stop by to let him know that Chelsea relayed some shocking information.

Sharon will note that Chelsea said she’s married and living with a new identity. Her new husband adopted Connor, so Chelsea isn’t interested in putting the kid through more emotional turmoil. Sharon will add that Chelsea wouldn’t reveal her location. Adam will naturally get agitated, but Sharon won’t think he should go any further with his mission.

Outside, Rey Rosales (Jordi Vilasuso) will hear Adam raising his voice. Back with Adam, he’ll take a call from Victor Newman (Eric Braeden) before heading out. Once Sharon returns to the cottage, she’ll find Rey and learn he was spying at the tack house. Rey will note that Sharon and Adam’s conversation looked awfully intense.

After Rey shares his fears, Sharon will ask if Rey’s afraid she’ll fall for Adam again. Rey will contend that he’s simply worried about Adam’s manipulation tactics. Later, Sharon will promise Rey that he doesn’t have any reason to be concerned.

At the coffeehouse, Lauren Baldwin (Tracey E. Bregman) will warn that Phyllis Summers (Gina Tognoni) counterfeit site had better be down. She’ll insist that if it isn’t, she’s not going to protect Phyllis anymore – and neither will Michael Baldwin (Christian LeBlanc).

Next, Phyllis will have a bit too much to drink at Society. She’ll end up bickering with Billy, who’ll mention suspicions about the knockoff site. Billy won’t be pleased that Phyllis took startup money and used it to fund something to target Jabot. Phyllis will lash out at her ex before taking off.

At Jabot, Summer Newman (Hunter King) will suspect Phyllis could be behind the copycat site. Jack will point out that he already confronted Phyllis before they make the Jabot Collective launch official. Afterward, Summer will embrace Kyle as she appreciates the awesome team they make. He’ll hope she finds happiness.

Summer will also receive a call from Theo Vanderway (Tyler Johnson), who’s landed in Genoa City. The Young and the Restless spoilers say Summer will join the Abbott celebration over the launch. There’ll be some awkwardness with Kyle thanks to Summer’s presence, but at least she’ll have Theo and an influencer named Natalia there.

As Jack and Lauren chat about sales numbers, Phyllis will burst in on a mission to rant at the Abbott celebrators. Lauren will guess that Phyllis has been drinking, but Phyllis will continue her outburst. Once Phyllis eventually exits, Lauren will admit to Jack that Phyllis was responsible for the site. She’ll note that she warned her to take it down, so Jack will be glad to have Lauren on his side.

At Newman Enterprises, Victor will suggest that maybe Adam should compromise with Nick Newman (Joshua Morrow) on the topic of Christian Newman (Jude and Ozzy McGuigen). He’ll think it’d be cruel to rip the boy away from Nick, but Adam will remind Victor that Christian is his son. Y&R spoilers say Adam will at least want to reconnect with Connor, which will lead to the Chelsea details coming out.

Victor will seem uneasy about Adam trying to track Chelsea down. Nevertheless, Adam will be stuck on the idea. Victor will ultimately take Chelsea’s phone number and vow to look into this for Adam. He’ll also request that Adam start a new work project, but Adam won’t want to team up with Victoria. The Young and the Restless spoilers say Adam will opt to distance himself from the Newman clan instead.

Afterward, Adam will tell Victoria that he’s going to use the capital she offered to do his own thing. Victoria will speak with Victor alone and warn him about thinking Adam is a victim here. Victor will assure Victoria that he doesn’t need to protect himself from his own son.

In Adam’s car, he’ll get a text that reveals his minion found what he was looking for. Adam will urge the person to stay on it. Meanwhile, Phyllis will have to veer off the road to avoid the headlights coming toward her. She’ll get out of her car and learn Adam is the driver she wants to rant at.

Back at Crimson Lights, The Young and the Restless spoilers say Traci will continue her book. She’ll write about Velma (Beth Maitland) declaring love to and kissing Flynn (Daniel Goddard), but then she’ll hit the backspace button and seem flustered.

It sounds like Traci’s crush is becoming something more! We’ll give you updates as other Y&R details comes in. Stay tuned to the CBS soap and don’t forget to check CDL often for the latest Young and the Restless spoilers, updates, and news.