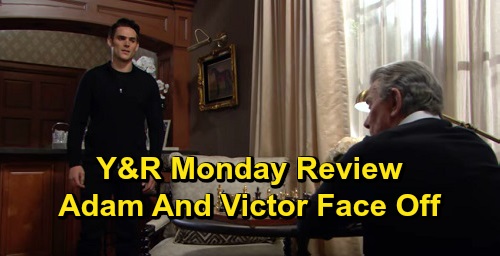 The Young and the Restless spoilers review for Monday, September 30, tease that Victor Newman (Eric Braeden) will wonder how Adam Newman (Mark Grossman) found out he was alive, but Adam will say it doesn’t matter and he’s leaving Genoa City. The two men will have a lengthy talk, during which Victor reveals that he knows Adam doubled his meds and Adam admits it. Adam will proceed to tell Victor that he deserves to live in exile after what he’s done, and that it’s better for his sons if he’s gone.

Adam will accuse Victor of trying to run him down in the road like a dog, but Victor will deny it. Victor will be pained as he tries to get Adam to stay and become the person he should be, but Adam will persist in wanting to leave and he’ll display plenty of self-loathing to his father. Ultimately, Adam will cry and tell Victor that he could never be what Victor wanted him to be, and that what he really wanted was Victor’s respect. Adam will say he’s sorry and that he hopes Victor can forgive him someday.

And with that, Nikki Newman (Melody Thomas Scott) will burst in the room, but Adam’s image will suddenly be gone, and Victor, with tears in his eyes, will turn to Nikki. It will be unclear whether Adam was ever in the room at all, or whether this was all a vision of Victor’s. And if this was all a vision of Victor’s, then where is Adam now? Has he indeed left Genoa City?

Meanwhile, on the new episode of Y&R on Monday, September 30, Chelsea Lawson (Melissa Claire Egan) will learn that Victor is alive. She’ll be in the middle of a heated discussion about Adam with Nick Newman (Joshua Morrow), when Nick blurts out that Victor is alive. Chelsea will at first be stunned, but she’ll quickly realize that Nick kept the truth from her because he didn’t trust her to not tell Adam. She’ll get even more angry as she realizes that Connor Newman (Judah Mackey) has been completely devastated over the loss of both his grandpa and his father over a big ruse.

Chelsea will blast Nick over the Victor death ruse, and she’ll accuse Nick of letting Connor suffer and go through hell just so he could exact revenge on Adam. Ultimately, she’ll tell Nick that his little charade cost Connor his father, and that she hopes it was worth it. Nick will try to comfort her, but she’ll pull away, seriously peeved with what he’s done. One wonders whether this will spell the end of Nick and Chelsea, or at least serve to weaken their bond. Chelsea doesn’t seem to take lightly to people messing with her son, so she and Nick could be on the outs from here.

Finally, on Monday’s episode of Y&R, Devon Hamilton (Bryton James) will host a meeting to discuss Katherine Chancellor’s (Jeanne Cooper) will. Amanda Sinclair (Mishael Morgan) will have received the pages from what she says Chance Chancellor (John Driscoll) is claiming is the “real will” and she’ll be anxious to share the document’s contents. Devon will have Brittany Hodges (Lauren Woodland) there to represent him, and Jill Abbott (Jess Walton) will arrive with Cane Ashby (Daniel Goddard) with her for moral support.

Amanda will whip out the pages and proceed to read out loud, after Jill protests the whole scenario and Cane attempts to calm her down. Finally, Amanda will cut to the chase and reveal that the bulk of Katherine’s fortune was left to Cane. Everyone will be stunned, and Cane will look around the room, apparently surprised by the news. But is he really surprised, or could he be a part of this whole scheme to undermine Devon and get his hands on the Chancellor fortune?

Given that he basically invited himself to be Jill’s “moral support” for the meeting, one wonders whether Cane could be behind all of this, perhaps acting in cahoots with Chance. Time will tell what’s going on here, but could Cane have some sort of score to settle with Devon? Or could it all just be about money? We’ll see what ultimately happens here, but Cane’s certainly involved in this controversy now.