BY Heather Hughes on May 4, 2019 | Comments: one comment
Related : Soap Opera, Spoiler, Television, The Young and the Restless 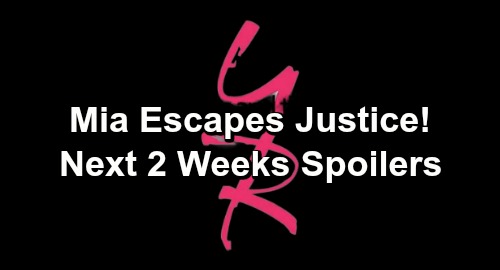 The Young and the Restless (Y&R) spoilers for the next two weeks tease that some shockers are brewing in Genoa City. During the week of May 6-10, Arturo Rosales (Jason Canela) will once again try to win Abby Newman (Melissa Ordway) back. Abby won’t even entertain the idea this time around. She’ll tell Arturo to get lost, but he won’t be ready to accept that it’s truly over.

Fortunately, Dr. Nate Hastings (Sean Dominic) will step up to make sure Arturo takes a hike. Nate will also do something a bit risky, so maybe he’ll ask Abby out afterward. She’ll owe him for handling the Arturo situation, so Nate might as well give it a shot.

As for Arturo, he’ll be just fine. Y&R spoilers say he’ll land in bed with Mia Rosales (Noemi Gonzalez), which is probably where he really wants to be anyway. However, Mia’s attack on Lola Rosales (Sasha Calle) will come back to haunt her. She’ll be arrested for Lola’s attempted murder, but will it be in a nightmare or will Paul Williams (Doug Davidson) actually take her into custody?

Either way, Mia should be rattled in the week ahead. Meanwhile, Summer Abbott (Hunter King) will do some scheming. During a trip to New York, Summer will encourage Kyle Abbott (Michael Mealor) to head to the club with her. It’ll be part of a celebration after they lock in a new deal.

Kyle will insist on catching a flight home to see Lola Rosales (Sasha Calle), so Summer will act like he’s not being a team player. Later, she’ll blab to Jack about Kyle not sticking around to schmooze, so he’ll order Kyle to focus on their project. Naturally, that means more time with Summer and other chances for her to win him over.

Over with Sharon Newman (Sharon Case), she’ll learn Adam Newman (Mark Grossman) is alive and promise to help Victor Newman (Eric Braeden) with his goal. Sharon will hope she can help Adam get his memories back. Next, Mariah Copeland’s (Camryn Grimes) stalker will be at it again. After Tessa Porter (Cait Fairbanks) realizes threat’s getting worse, she’ll send a message back and challenge the culprit.

During the week of May 13-17, Rey Rosales (Jordi Vilasuso) will make a demand. He’ll want a paternity test ASAP, so we’ll soon find out whether Mia’s carrying Rey’s baby or Arturo’s. Over with Summer again, she’ll do something sneaky and awfully territorial. Summer will hope she can gain the upper hand in her fight to win Kyle’s heart, so Lola will have to watch her back.

Back with Victor, he’ll do something daring – presumably as part of his plan to bring Adam back to GC. The Young and the Restless spoilers say Mark Grossman will make his debut on May 13, so that’s definitely something to look forward to. Sharon will be a big part of Adam’s introduction, which could make some waves in her relationship with Rey.