The Young and the Restless Spoilers: Shadam Blooms Again, Sharon Falls In Love With Adam – Jealousy Erupts for Rey and Nick

BY Heather Hughes on May 4, 2019 | Comments: 2 comments
Related : Soap Opera, Spoiler, Television, The Young and the Restless 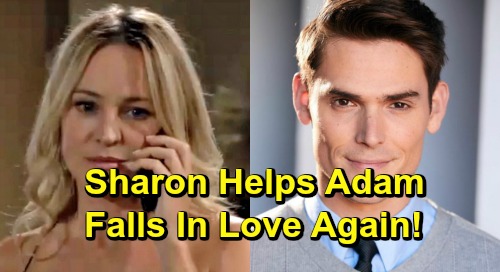 The Young and the Restless (Y&R) spoilers tease that Sharon Newman (Sharon Case) will find her mind wandering toward the past. After Victor Newman (Eric Braeden) admits Adam Newman (Mark Grossman) is alive, Sharon will plan to meet with him and talk about his history – as well as their history. Sharon will also talk to Rey Rosales (Jordi Vilasuso) about her ex and what their romance was like.

Rey may not be too concerned at first. He’ll probably trust that Adam is part of Sharon’s past and nothing more, especially if she mentions Adam’s great love for Chelsea Newman (Melissa Claire Egan). Sharon might argue that Chelsea is Adam’s perfect match and suggest that she’s just trying to help. It’s doubtful she’ll do anything that would make Rey think she’s still interested in Adam.

However, things could change after Sharon and Adam’s upcoming meeting. He’s been hesitant to let Victor or Dr. Calhoun get through to him, but we all know Sharon has a kind spirit – most of the time anyway! Adam may feel safe with Sharon, which could encourage his memory walls to come down.

Of course, there’s no guarantee Adam will remember everything at first. He might just recall bits and pieces. What if he only remembers Sharon moments initially? That’d be an interesting way to approach this storyline. If this stirs up old feelings for Adam, it just might do the same for Sharon.

In an interview with SOD, Sharon Case talked about the deep connection Sharon and Adam had once upon a time. “It was the most intense relationship she’s had,” Case admitted. “Adam is her ride or die.” Case also suggested that this is “a life-changing situation” for all parties involved. The Young and the Restless spoilers say Sharon won’t be the only one affected by Adam’s big comeback.

This could spark some changes for Sharon and Rey. It could definitely alter Nick’s bond with Sharon as well. The Young and the restless spoilers indicate that Nick will be both protective and jealous as Sharon and Adam warm up. Chelsea is also returning to Y&R, so she’ll have to fit in all of this as well. If Adam finds himself sticking to Sharon like glue, it’s easy to imagine Rey, Nick and Chelsea all battling jealousy down the road.