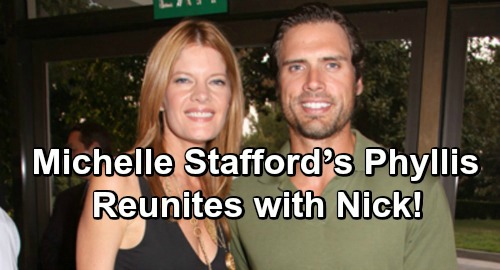 The Young and the Restless (Y&R) spoilers tease that there are some good reasons why Sharon Newman (Sharon Case) is part of Adam Newman’s (Mark Grossman) comeback storyline. This will undoubtedly affect Sharon’s relationship with Rey Rosales (Jordi Vilasuso) in a big way, but it just might affect Nick Newman’s (Joshua Morrow) love life even more. Let’s consider how this might play out.

During a recent chat with Rebekah Barlow (Jennifer Taylor), she could sense that Nick was feeling lost and adrift. Rebekah suggested that Nick wasn’t the kind of guy who liked casual hookups or even being single. It’s true that Nick seems to thrive on the stability of a relationship, but reuniting with Sharon doesn’t seem likely anytime soon. She’ll probably be torn between Rey and Adam.

Where does that leave Nick? Perhaps watching Adam and Sharon reconnect will drive Nick to a past romance, too. Of course, we’re talking about Phyllis Summers – but not Gina Tognoni’s version. Most Y&R fans agree that their chemistry didn’t quite work, but Michelle Stafford is set to reclaim the role soon enough. Classic “Phick” just might be exactly what Nick needs!

After all, The Young and the Restless must’ve had a plan in mind when they fired Tognoni and brought Stafford back. She’s returning for big stories and big stories involve love interests. It makes sense to pair up Stafford and Morrow’s characters again. Their version of the “Phick” pairing has proven successful in the past.

Nick may find himself a bitter and broken man thanks to all the looming drama. The Young and the Restless spoilers say Adam may be more ruthless than usual. Imagine how Nick will feel if Adam reunites with Sharon, takes over Newman Enterprises and sues for custody of Christian Newman (Jude and Ozzy McGuigen). Nick’s going to feel like his world’s falling apart, so that’ll bring some anger.
Meanwhile, we’ve got an already struggling Phyllis. She seems poised for another huge fall with her latest business venture, so she might end up commiserating with Nick. Phyllis and Nick once decided to be a true power couple, but that didn’t really pan out in the end. Here’s their chance to get things back on track!

Would you like to see Stafford’s Phyllis reunite with Nick? Will they get back together and become a force to be reckoned with? We’ll give you updates as other Y&R news comes in. Stay tuned to the CBS soap and don’t forget to check CDL often for the latest Young and the Restless spoilers, updates, and news.