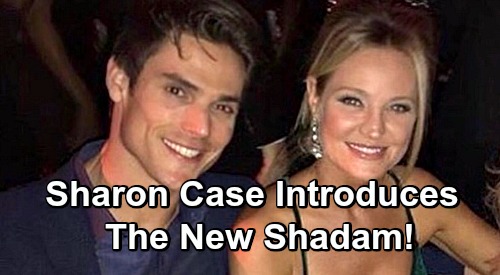 The Young and the Restless (Y&R) spoilers reveal that fans got their first glimpse at a hot new pairing – or at least a hot new version of them! At the recent Daytime Emmys celebration, Sharon Case (Sharon Newman) had her picture taken next to the new Adam Newman (Mark Grossman). She later shared that photo on Twitter, so now we can see what a “Shadam” reunion might look like.

“Introducing, Mark Grossman!” Case tweeted. They were both flashing some great smiles as they enjoyed this exciting evening. Sharon is playing a huge role in Adam’s comeback storyline, so there’s a good chance he screen-tested with her. This is the perfect way to shake things up for Sharon and Rey Rosales (Jordi Vilasuso), who will need another obstacle after Mia Rosales (Noemi Gonzalez) exits.

Of course, a “Shadam” reunion would also cause plenty of problems with Nick Newman (Joshua Morrow). Part of Nick will always love Sharon, so jealousy could become a big part of this Young and the Restless plot. If Sharon gets caught in the middle of the inevitable custody battle, that’d bring some fantastic conflict, too.

Since Chelsea Newman (Melissa Claire Egan) is coming back, things are kind of up in the air on which woman Adam will end up with long-term. Perhaps it depends on the chemistry between Grossman and his costars as well as how long Egan signed on for. It’s too early to say whether “Chadam” has a real chance.

Regardless, Case and Grossman look good together! If that’s the route Y&R decides to take, maybe it’d be a pretty good idea. Case is one of those rare, magic actresses who has chemistry with just about anyone. Some of her pairings are better than others, but she makes all of them decent. Case can sell it – no matter the age or style of her leading man.

Grossman is a bit younger than the last couple versions of Adam, but he’s handsome and can hopefully act. Once everyone gets used to Grossman’s portrayal, perhaps he’ll be accepted just like Justin Hartley was when he claimed the role after Michael Muhney. The Young and the Restless spoilers say Adam will be driving the drama for months to come, so let’s hope this gamble pays off for Y&R!

What do you think about the new Adam? Do you think Grossman will succeed in the part? Are you rooting for Adam and Sharon to reunite romantically? We’ll give you updates as other Y&R news comes in. Stay tuned to the CBS soap and don’t forget to check CDL often for the latest Young and the Restless spoilers, updates, and news.