The Young and the Restless Spoilers: Tuesday, May 7 Recap – Mia and Arturo Hook Up, Plan to Skip Town – Adam Contacts Sharon 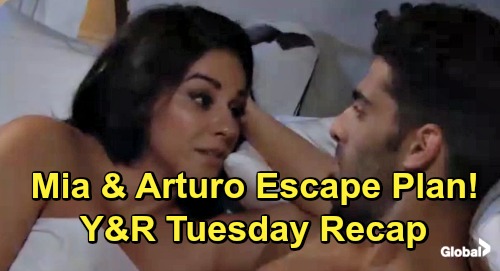 The Young and the Restless (Y&R) spoilers update and recap for Tuesday, May 7, tease that Sharon Newman (Sharon Case) will be rattled when she hears Adam Newman’s (Mark Grossman) voicemail. She’ll hang up and tell Rey Rosales (Jordi Vilasuso) that she’s sure it’s the real Adam. Once Sharon calls back, she’ll tell Adam that they knew each other a long time ago. Sharon will hope he’s willing to meet and talk.

Next, Nikki Newman (Melody Thomas Scott) will arrive after getting updates from Nick Newman (Joshua Morrow). She’ll wonder what the current situation is, so Rey and Sharon will explain that Adam is in hiding. They’ll let Nikki know that Victor Newman (Eric Braeden) overwhelmed Adam with the memory-retrieval efforts, but they’re trying to track him down.

Nikki won’t understand what Sharon’s motive is for helping, but Sharon will contend that Adam saved her on more than one occasion. She’ll be determined to return the favor when he needs her most. After Victor joins the gang, Nikki will start pumping him for information. When a text comes in for Sharon, she’ll realize it’s from Adam – who wants to meet her alone.

Later, Rey will be anxious about this solo meeting for Sharon. He’ll worry that something might happen to her, but Victor will insist he won’t let it. Victor will add that Rey had better not mess with his family, so it sounds like Rey will have to cooperate and hope for the best. In a shadowy park, someone will lurk as Sharon waits on a bench.

Back in Genoa City, Nick and Phyllis Summers (Gina Tognoni) will spar over Summer Abbott’s (Hunter King) job. Phyllis will get why Summer wants to throw herself into work right now. She’ll suggest that if it’s a mistake for Summer to stay at Jabot, then at least she can learn from it.

Nick will think Phyllis’ accessories line might have something to do with this, but Phyllis will act appalled. She’ll deny having any ulterior motives for her support. Afterward, Phyllis will meet with Mia Rosales (Noemi Gonazlez) to deliver some bad news. She’ll admit she wasn’t thrilled with Mia’s ideas, so she can’t join her team after all.

Meanwhile, Arturo Rosales (Jason Canela) will try unsuccessfully to patch things up with Abby Newman (Melissa Ordway). After she suggests he focus on the baby instead, Arturo will keep at it. Dr. Nate Hastings (Sean Dominic) will finally have to make Arturo back off. Later, Arturo and Mia will commiserate at the coffeehouse. They’ll end up taking their pity party over to Mia’s hotel room.

After sex, Arturo and Mia will discuss potentially heading back to Miami. Y&R spoilers say Arturo will point out there’s no better time since there’s a cover-up going on. At Society, Kyle Abbott (Michael Mealor) will fill Lola Rosales (Sasha Calle) in on his last-minute business trip with Summer. He’ll offer to back out, but she’ll eventually urge him to go ahead. Lola will assure Kyle that she trusts him.

Once Abby learns what’s up, she’ll notice a selfie Summer posted with Kyle. Despite Lola’s claims that Summer has accepted the end of her marriage, Abby just won’t think that’s true. The Young and the Restless spoilers say Abby will also bond with Nate over drinks on Tuesday, so these two are inching toward a romance.

At Jabot, Jack Abbott (Peter Bergman) will reject Phyllis’ attempt to pitch her new line. After Phyllis is turned away, she’ll end up hacking into the Jabot servers with Summer’s password. The Young and the Restless spoilers say Phyllis won’t think she needs Jack. She can just check out all the Jabot Collective details and gain the upper hand herself.

It sounds like another exciting episode’s coming up. We’ll keep you posted as other Y&R details emerge. Stay tuned to the CBS soap and don’t forget to check CDL often for the latest Young and the Restless spoilers, updates, and news.