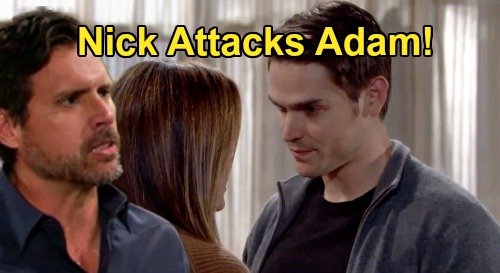 The Young and the Restless (Y&R) spoilers tease that Nick Newman (Joshua Morrow) will fume over Phyllis Summers’ (Michelle Stafford) revelation. Despite Phyllis’ attempt to take the high road, she just won’t be able to stay silent. Phyllis will blow the lid off Adam Newman’s (Mark Grossman) plot and cause major drama in the process.

After Phyllis refuses to attend Nick’s Christmas gathering, Nick will wonder what changed her mind about accepting his invitation. When Phyllis reveals that Nick’s invitation to Adam did it, that’ll just spark more questions. Phyllis will eventually admit Adam had a plan to win back Chelsea Lawson (Melissa Claire Egan). She’ll reveal how Adam wanted her to seduce Nick and eliminate an obstacle to his reunion with Chelsea.

As you can imagine, this will set up quite the confrontation for these brothers! The Young and the Restless spoilers say Nick will be absolutely enraged. He’ll think this is so typical of Adam. Nick always thought Adam was trying to manipulate the situation, so he’ll finally have proof. Phyllis’ word will be good enough for Nick, which means an explosive holiday party is coming up.

The Young and the Restless spoilers say Nick will rip into Adam for what he tried to do. He’ll think this shows Adam only cares about serving his own agenda. Nick should be more than happy to show Chelsea Adam’s true colors. However, this could backfire if Nick takes things too far.

Whatever the case, Nick and Adam’s war will reignite over Phyllis’ bombshell. He’ll attack Adam during the week of December 30-January 3, so this fight could potentially get physical. Honestly, people should be throwing more punches on Y&R. Enough with verbal arguments already! We need some excitement, and Nick will certainly be furious enough to sock Adam in the kisser. Let’s hope he does just for drama’s sake.

Adam could easily retaliate after Nick blasts him at this Christmas shindig. Their brother battle will be back on, so Chelsea will get caught in the middle as the conflict heats up. We’ll give you updates as other Y&R news comes in. Stay tuned to the CBS soap and don’t forget to check CDL often for the latest Young and the Restless spoilers, updates and news.