BY Marcy Cohen on January 25, 2019 | Comments: one comment
Related : Soap Opera, Spoiler, Television, The Young and the Restless 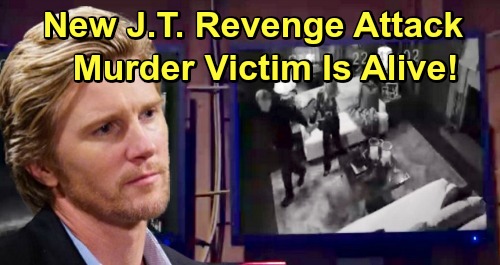 The Young and the Restless (Y&R) spoilers tease that Victor Newman (Eric Braeden) will have to watch his back. He’s currently out on bail, but he’s stuck at the ranch thanks to that ankle bracelet monitor. Of course, that doesn’t mean danger can’t hit hard. Y&R has established that the ranch isn’t very secure!

In fact, someone planted some surveillance cameras and will continue to watch every move the Newmans make in there. That’ll give this enemy an advantage as this story heats up. During the week of January 28-February 1, The Young and the Restless spoilers say Victor will face a vengeful setback. He’ll worry about his family’s safety as well as his own freedom.

After all, Victor isn’t off the hook yet. He still needs to figure out how to clear his own name and catch the person who’s framing him. Neither of those things will be easy, but at least Victor will have some help. Nick Newman (Joshua Morrow) has undergone a bit of a transformation over the past few months. He takes more risks and can sometimes be a chip off the old block in his strategies.

Over the next few weeks, Nick will prove he’s Victor’s son by stepping up for his family in a big way. He’ll do whatever he can to keep Nikki Newman (Melody Thomas Scott) and Victoria Newman (Amelia Heinle) out of prison. Sharon Newman (Sharon Case) and Phyllis Summers (Gina Tognoni) are wrapped up in this as well, so they’ll have to tow the line if they want to stay in the circle of safety.

Sadly, Nikki’s about to make a massive blunder. She may inadvertently undermine Victor and Nick’s efforts. What will Nikki do that turns out to be so terrible? Could she let something slip that she shouldn’t? Will this be about giving their tormentor a leg up somehow?

It looks like Nikki’s mistake could set up that vengeful setback we mentioned. Nikki may make an even bigger mess for Victor soon enough! Unfortunately, there’s still no confirmation on who’s targeting the Newman clan.

It’s worth mentioning that an alive J.T. Hellstrom (Thad Luckinbill) still makes the most sense. He had access to his own blood and clothes for the planted evidence.

Plus, the tormentor seems to be focusing on Victor and Nikki instead of the other cover-up crew members. That’d fit with J.T. since he already hated Victor and nearly killed him twice. J.T. would also have a reason to go after Nikki for hitting him with the fireplace poker. J.T. had complicated feelings about Victoria and the others were just caught up in the mess.

If Phyllis is as innocent as she claims, who else would know about that fireplace poker except someone in that very room? J.T. is also a security expert, so all this surveillance stuff would be a piece of cake for him (or for Adam Newman!!). Everything lines up, but twists and turns are always possible in the soap world. Y&R fans will be eager to see the conclusion all this is building toward.