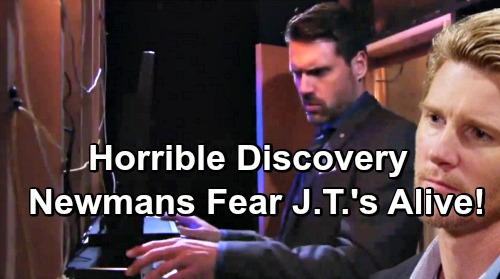 The Young and the Restless (Y&R) spoilers for the week of February 4-8 tease that all’s fair in love and war! Several hot stories will even hotter as rivals face off and secrets are uncovered. For starters, Summer Newman (Hunter King) will keep stirring the pot. She’ll corner Kyle Abbott (Michael Mealor) on more than one occasion to talk him out of dating Lola Rosales (Sasha Calle).

Summer will wonder what a bad boy like Kyle is doing with a good girl like Lola. She’ll think his needs aren’t being met and happily offer herself as an alternative. Summer will push Kyle’s buttons every chance she gets, but he’ll play it cool – at least at first. However, things will escalate as Summer’s antics continue. The more doubts Summer creates for Lola, the angrier Kyle will become.

The Young and the Restless spoilers say Kyle will reach his breaking point soon, but will the end result be a raging outburst or potential hate sex? It could even be both when you’re dealing with a gal like Summer! She’s down for anything, so we’ll see if Kyle will think this through or if he’ll let his desires take control.

Other Y&R spoilers say Abby Newman (Melissa Ordway) will make herself crystal clear. During cocktail hour with Mia Rosales (Noemi Gonzalez), Abby will warn her rival to back off. She may seem like a dainty Newman princess, but she can prove she’s Victor Newman’s (Eric Braeden) daughter when she has to.

Abby will suggest Mia needs to leave her relationship with Arturo Rosales (Jason Canela) back in high school where it belongs. She’ll think she’s finally found true love with Arturo, so she won’t let Mia’s petty jealousy destroy her dreams. Meanwhile, Victor will discover the surveillance setup at the ranch. He’ll determine that this attack on the Newman clan is far worse than he ever could’ve imagined.

Victor, Nikki Newman (Melody Thomas Scott) and Nick Newman (Joshua Morrow) will ponder the possibility that J.T. Hellstrom (Thad Luckinbill) is still alive. Nick will realize that if they can prove it, Victor’s murder charges won’t stick. He’ll think the fate of the Newmans depends on what he does next.

Nick will examine some of equipment with Michael Baldwin (Christian LeBlanc). He’ll explain the situation and insist that the person behind this has been inside his parents’ home. Nikki won’t feel safe and that’s just not going to work for Nick. He’ll tell Michael that they have to stop the culprit, but that’s easier said than done.

The Young and the Restless spoilers state that a recording will surface that changes the game. It’ll manipulate the facts and point to Victor’s guilt, so Nick will grow truly concerned. Of course, he could grow even more concerned once Nikki steps forward with something important to say! Rey Rosales (Jordi Vilasuso) and Christine Williams (Lauralee Bell) will certainly be interested to hear this.

A startling admission may be coming up, so Y&R fans won’t want to miss all the drama. We’ll give you updates as other news emerges. Stay tuned to the CBS soap and don’t forget to check CDL often for the latest Young and the Restless spoilers, updates, and news.