BY Heather Hughes on February 1, 2019 | Comments: one comment
Related : Soap Opera, Spoiler, Television, The Young and the Restless 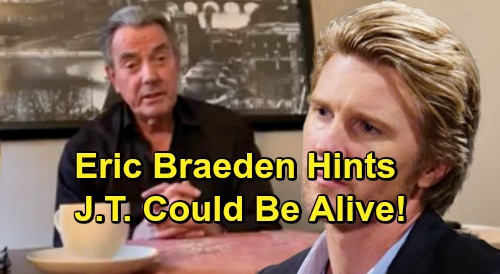 The Young and the Restless (Y&R) spoilers tease that the cover-up crew will face another crisis. The secret is taking a toll on Nikki Newman (Melody Thomas Scott), Victoria Newman (Amelia Heinle), Sharon Newman (Sharon Case), and Phyllis Summers (Gina Tognoni). Ever since Nikki bashed J.T. Hellstrom (Thad Luckinbill) in the head with a fireplace poker, their lives have been a nightmare.

The girls’ night gang has been worried that the truth will come out, but the truth could actually set them free in the end. That’s because there’s a good possibility that J.T. is alive. It’s not like a doctor declared J.T.’s dead that night. The women were flustered and emotional, so perhaps they made a mistake. J.T. could’ve just been knocked out cold.

Victoria and the others buried J.T.’s body in Chancellor Park, but where is it? Victor Newman (Eric Braeden) apparently didn’t move it and he would’ve been the most reasonable suspect to do so. The tormentor framed Victor with that bloody shirt and gun, but why? This person got his or her hands on the fireplace poker. Why not just leave the body alone, frame Victor with the poker and let him go down that way?

Maybe that’s because there’s no body at all. If J.T. got some help climbing out of that hole, he might’ve reached the surface before it was too late. It’d be an easy explanation for why the framer used bogus evidence instead of the real deal, which this person obviously had access to. A bloody shirt plus a gun could equal a murder conviction. A common fireplace poker without a corpse does not.

In a recent Facebook Live interview, Eric Braeden was asked if J.T. is still alive. Braeden couldn’t confirm it, but he did point out that someone broke into Victor’s house. He used a sinister voice that suggested J.T. could be that someone. Braeden certainly didn’t rule it out and Y&R fans shouldn’t either – J.T could be alive!

The hateful Hellstrom makes the most sense as the tormentor, especially since an alive J.T. would work out well for the deadly posse. They’ll still be in trouble, but they’ll be in a lot less of it without murder charges! There’s no way Sharon, Victoria, Nikki and Phyllis will stay behind bars for any lengthy period of time, so The Young and the Restless needs a way to get them off the hook.

Bottom line, an alive J.T. would resolve most of the cover-up crew’s complications and would certainly rock Genoa City. The Young and the Restless spoilers hint that Nikki will confess soon, so things will get worse before they get better! We’ll give you updates as other Y&R news comes in. Stick with the CBS soap and don’t forget to check CDL often for the latest Young and the Restless spoilers, updates, and news.