BY Heather Hughes on October 24, 2019 | Comments: one comment
Related : Soap Opera, Spoiler, Television, The Young and the Restless 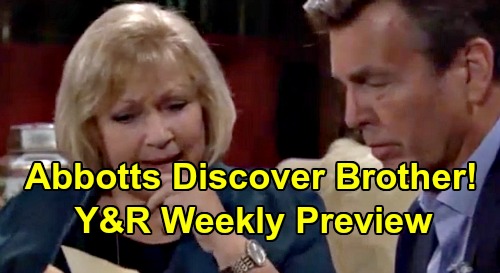 The Young and the Restless (Y&R) spoilers for the week of October 28-November 1 tease that some stunning moments are on the way. First, let’s talk about the big Abbott family mystery that’s unraveling. Jack Abbott (Peter Bergman) and Traci Abbott (Beth Maitland) are working hard to uncover a secret. They’ll finally make a major breakthrough thanks to an old friend of Dina Mergeron (Marla Adams).

Doris Tillington (Mary-Margaret Lewis) has known the Abbotts for years, but she’s always been loyal to her pal. She’s been sitting on a shocker for decades, but she’ll finally divulge the news soon enough. The Young and the Restless spoilers reveal that Dina had Stuart Brooks’ baby and gave the child up. Doris will confirm the bombshell, but Jack and Traci will track down a decree of adoption as proof.

The father won’t be listed, but they’ll know the “baby daddy” was indeed Stuart thanks to Doris and their other suspicions. Jack and Traci will realize they have a half-brother out there somewhere. Of course, there’s a chance this half-brother is dead if he turns out to be Theo Vanderway’s (Tyler Johnson) father. Someone named Eric Vanderway (Jon Briddell) is set to appear on November 7, but that could be for a flashback. Regardless, it seems likely Theo will be Dina’s long-lost grandson.

Over with Adam Newman (Mark Grossman), he’ll shove a check in Phyllis Summers’ (Michelle Stafford) face and tell her to go away. Adam will warn Phyllis not to come back as she examines the amount. Y&R spoilers say Phyllis will be surprised by this $10 million gift, which is really more of a bribe if Adam wants her to leave him alone.

Phyllis considers Adam to be her friend in a weird way. She should be hurt that he’s trying to throw money in her direction and get rid of her. However, this might be part of Phyllis’ alternate reality Halloween special. Her power trip won’t pan out like she expects, so losing her only pal would be a real nightmare!

Other Young and the Restless spoilers say Amanda Sinclair (Mishael Morgan) will tell Nate Hastings (Sean Dominic) goodbye. She’ll suggest that she’s belatedly taking Nate’s advice and heading home. Nate will ask for a favor before Amanda does that. He’ll need some legal advice, which will be related to his decision to help Victor Newman (Eric Braeden) fake his death. It sounds like Amanda’s found a new case to keep her in town.

Meanwhile, some Halloween fun will go down at Crimson Lights. Nick Newman (Joshua Morrow), Billy Abbott (Jason Thompson) and Victoria Newman (Amelia Heinle) will be decked out in their costumes. They’ll pop in with the kids before hitting the candy trail once again.