The Young and the Restless Spoilers: Rey Explodes Over Mia’s Pregnancy With Arturo’s Child, Wife Goes Down for Lola Attack 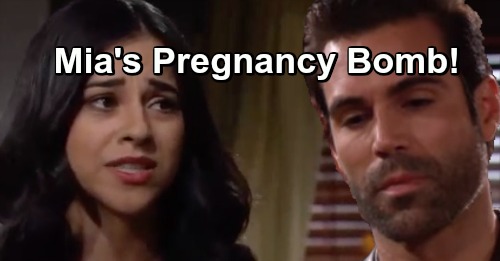 The Young and the Restless (Y&R) spoilers tease that Mia Rosales (Noemi Gonzalez) will play with fire by using a secret against Arturo Rosales (Jason Canela). Of course, Mia could easily get burned. She’s got even more secrets of her own and those will inevitably come back to bite her.

On Monday’s newY&R episode, March 18, a flashback rewrite reveals that Mia slept with Arturo the night of the snowstorm. She threatens to spill the beans to Abby Newman (Melissa Ordway) if Arturo can’t help her get Rey Rosales (Jordi Vilasuso) back. However, this plan could be a disaster thanks to everything Mia’s hiding.

Mia offered a pregnant woman cash and showed off a positive pregnancy test a short time later, so we can assume she paid for urine. Y&R made it pretty clear that Mia faked the pregnancy test, but she could still have a bun in the oven. Arturo’s bun to be exact!

During the week of March 18-22, The Young and the Restless spoilers say Arturo will come clean to Abby about something. Will he decide to tell Abby the truth about his hookup? That’d be awfully risky, but at least he’d eliminate Mia’s leverage. It would also blow up Mia’s world in a big way.

That’s because Mia tried to attack Abby and nearly killed Lola Rosales (Sasha Calle) in the process. Rey’s only keeping quiet because he believes she’s pregnant with his baby. Faking the pregnancy would be bad enough, but getting pregnant by his brother? Rey may want to lock Mia up and throw away the key!

By pushing Arturo on this, Mia may bring the hookup secret out into the open. That could bring the attack secret to light and score her a lengthy prison sentence. It’s possible Rey will still have mercy for the kid’s sake, but it’s tough to say.

Sometimes Rey lets a need for justice and a sense of betrayal cloud his judgment. After all, he arrested Sharon Newman (Sharon Case) on the spot after promising to protect her. Will Mia be the next one to face that broken promise? Regardless, you can bet Rey will explode when he finds out about Mia’s latest round of cheating.