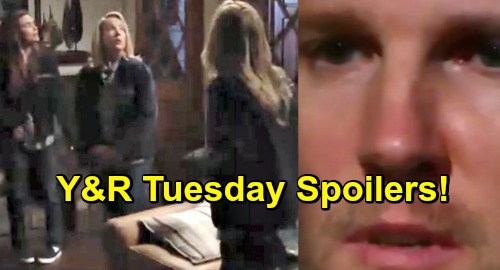 The Young and the Restless (Y&R) spoilers for Tuesday, March 19, tease that Victor Newman (Eric Braeden) will get some troubling news. He usually knows all when it comes to the happenings around town, but one sudden plan will catch him off guard. Victor will get updates on Nick Newman’s (Joshua Morrow) risky scheme with Billy Abbott (Jason Thompson) and Rey Rosales (Jordi Vilasuso).

Rey’s involvement in the cover-up crew’s escape may concern Victor. The detective clearly can’t be trusted, but his getaway assistance was necessary. Rey helps them hijack the prison transport van and stash the women at the Abbott cabin on Monday’s new Y&R episode, March 18, but Tuesday’s task will be just as daunting and even more dangerous. The Young and the Restless spoilers say Victor will fear for the ladies he loves.

Nikki Newman (Melody Thomas Scott) and Victoria Newman (Amelia Heinle) have to be Victor’s priority. Keeping them safe is the most important thing, so Victor will want to make sure of that. However, Billy and Nick will push for a bold strategy. They’ll feel confident they can keep Victoria, Nikki and Sharon Newman (Sharon Case) tucked away while they target J.T. Hellstrom (Thad Luckinbill).

After confirming that Victoria’s house is bugged, the guys will talk about how they’re holding the women at a Dark Horse warehouse. Of course, that’ll just be a lie to lure J.T. there. Unfortunately, J.T. won’t buy it. He’ll likely listen in on another chat elsewhere and realize the Abbott cabin is where he needs to be. Regardless, J.T. will indeed make his way over there later this week.

In the meantime, Y&R spoilers say Christine Williams (Lauralee Bell) will have suspicions. She’ll grill Rey about his motives, so this may involve a very public search for the fugitives. The guys need J.T. to know for a fact that the women are no longer in police custody. They’ll think that’s the only way J.T. will believe their warehouse story.

If Rey seems cold about Sharon’s fate, that could raise red flags for Christine. She may wonder if Rey had something to do with the getaway itself, but he’ll deny it if she asks. Rey might make it clear that he wants justice, which means putting Sharon and the others back behind bars. If so, Christine will want to keep an eye on her smitten detective. She may think he’s hiding a few things!