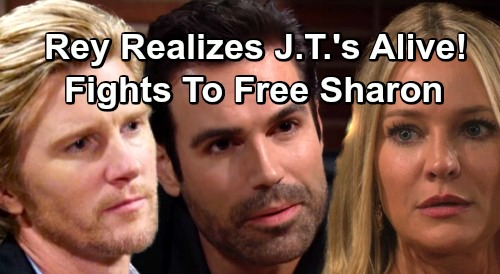 The Young and the Restless (Y&R) spoilers tease that Rey Rosales (Jordi Vilasuso) will want to make things right, but he’ll need some help to make it happen. After convictions come down for the cover-up crew, Victor Newman (Eric Braeden) will do everything in his power to help them. The same goes for Nick Newman (Joshua Morrow) and Billy Abbott (Jason Thompson).

This team effort could convince Rey that the cops got it wrong once again. Since J.T. Hellstrom’s (Thad Luckinbill) body was never found, there’s no proof that he’s dead. Once new evidence surfaces, Rey may become convinced that J.T.’s still alive. He may want to reopen the investigation unofficially and see what he can find.

Once Christine Williams (Lauralee Bell) realizes what’s going on, she’ll sense this spells trouble. It seems Rey will survive his love confession debacle and remain a GCPD detective, but he’ll be on thin ice. Once more wrong move could truly tank his career, so Christine may warn him of that. The Young and the Restless spoilers say she’ll definitely suspect Rey has ulterior motives next week.

Christine may argue that the case is over and the culprits have been locked up. She could push Rey to drop this, but he may feel like there’s more to the story. Victor, Nick and Billy’s hard work could help him see the light.

Rey wasn’t written as a very bright detective early on, but that’s changed recently. He quickly found out Mia Rosales (Noemi Gonzalez) was behind the attack on Lola Rosales (Sasha Calle). Rey also figured out Summer Newman’s (Hunter King) anonymous donor strategy right off the bat. His instincts are good now, so he may change his mind about this case as new evidence surfaces.

Christine might think the Newmans have cooked something up to get Nikki Newman (Melody Thomas Scott), Victoria Newman (Amelia Heinle) and Sharon Newman (Sharon Case) off the hook. However, Rey may insist that they have to look into this. He won’t feel right about leaving the ladies locked up if there’s a chance they’re not guilty of murder.

That’s especially true when it comes to Sharon. Rey is in love with her and desperately needs a way to get her back on his side. Sharon now thinks Rey’s feelings were part of his manipulation, so he has to prove his devotion. What better way to do that than to undo the women’s convictions? And what better way to undo murder convictions than to produce the murder victim ALIVE!

The Young and the Restless spoilers say Christine will feel like Rey’s doing this for love and not justice. She won’t want him playing rescue ranger if Sharon deserves to be behind bars. Nevertheless, Rey’s shown he can be a determined detective when the need arises. You can bet he’ll fight for Sharon’s freedom in the coming Y&R episodes.

Y&R buzz says that Victor Newman (Eric Braeden) could team up with Rey in some capacity to seek justice and partially exonerate the cover-up crew. Victor and Rey are far from pals but they could come together over this shared interest.

It sounds like the excitement will continue to build in this shocking storyline. Do you think Rey will be the one to prove J.T. is alive and perhaps capture him? We’ll give you updates as other Y&R news comes in. Stay tuned to the CBS soap and don’t forget to check CDL often for the latest Young and the Restless spoilers, updates, and news.