The Young and the Restless Spoilers: Sharon Finally Gets Her Shot with Rey After Mia Cheats – But J.T. Lies Change Everything 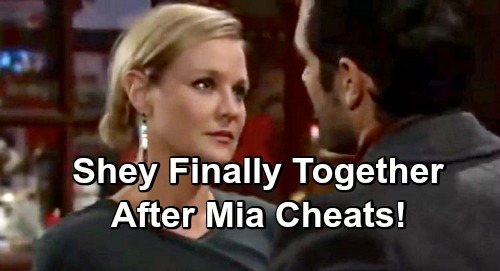 The Young and the Restless (Y&R) spoilers tease that Rey Rosales’ (Jordi Vilasuso) marriage is headed for trouble. He told Sharon Newman (Sharon Case) that he’s let go of his anger toward his wife. Mia Rosales (Noemi Gonzalez) betrayed Rey with his own brother, so it’s easy to see why he was enraged.

It took Rey a long time to move past Mia and Arturo Rosales’ (Jason Canela) affair, but he’s finally done it. Rey’s starting to find some happiness with Mia again – although he’s still battling strong feelings for Sharon. She’s got those same feelings, but they both seem to have them under control for now.

Of course, that could change thanks to the temptation that’s brewing. Arturo will struggle with his desires next week, so it sounds like that’s about Mia. Ever since she returned, she hasn’t hesitated to spend time with Arturo.

Mia seems like the idea of having power over him. She wants Arturo to want her, especially since she’s not a big fan of Abby Newman (Melissa Ordway).

Getting Arturo all worked up must give Mia some kind of thrill. However, she may change her mind about that as her relationship with Rey deepens. Mia came to Genoa City to get her marriage back on track. She’s accomplished that goal, so she won’t want to blow it.

If Mia gets too close to Arturo, she could end up destroying all the progress she’s made. Unfortunately, that appears to be where this Y&R storyline’s going. Mia and Arturo may not be able to resist each other for much longer.

Rey could get his heart broken all over again and guess who’ll be waiting to pick up the pieces? You can bet Sharon will step right up to comfort Rey, but there’ll be a big problem. Her secret about J.T. Hellstrom’s (Thad Luckinbill) death and the cover-up alliance is on the verge of exposure.

Rey will eventually realize Sharon’s been lying to his face for months. She sat right across from him at work and pretended to know nothing about what really happened to J.T.

Will Sharon sabotage her own shot with Rey? Maybe temporarily, but things will probably work out for them in the end. Rey may understand the complexity of the situation at some point. He may not believe the cover-up crew’s story at first, but he could have a different view of the situation later.

Bottom line, The Young and the Restless will likely use this as the final hurdle to “Shey.” Are you hoping Rey and Sharon can finally overcome all the obstacles? We’ll give you updates as other Y&R news comes in. Stay tuned to the CBS soap and don’t forget to check CDL often for the latest Young and the Restless spoilers, updates and news.