The Young and the Restless Spoilers: Sharon Gets Hate for Supporting Adam – Does She Deserve Town Pariah Status? 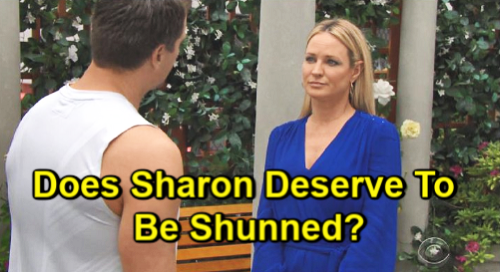 The Young and the Restless (Y&R) spoilers tease that Sharon Newman (Sharon Case) is set to make plenty of trouble for herself – and it’s all thanks to Adam Newman (Mark Grossman). Sharon’s efforts to help Adam have already led to drama around town. Rey Rosales (Jordi Vilasuso) wasn’t willing to be Sharon’s safety net, so he finally cut her loose.

Nick Newman (Joshua Morrow) and Victoria Newman (Amelia Heinle) certainly don’t approve of the “Shadam” connection either. Chelsea Newman (Melissa Claire Egan) feels like Sharon is the only one who could possibly get through to Adam, but Nick thinks Adam’s just going to drag Sharon down with him instead.

Mariah Copeland (Camryn Grimes) offered an Adam warning as well, but Sharon just won’t be able to resist his pull. During the week of August 5-9, Sharon and Adam will hit the sheets. They’ll have an intense sex session, and Adam will likely be more than happy to gloat about that later. Even if Adam doesn’t come right out and say it, he’ll find a way to make it known that they slept together.

Once the news spreads among Sharon’s circle, she may become a full-blown pariah in Genoa City. That’s pretty much the price of supporting a guy like Adam. There’s certainly not a lot of love floating around for him in GC, but that’s part of the attraction for Sharon. She likes that he’s a messed up and dangerous bad boy. Sharon probably also likes the fact that Adam’s so trusting and reliant on her.

Does Sharon deserve to be shunned for her support of Adam? Y&R fans seem to be in disagreement on this. On Twitter, plenty of people have been weighing in on Sharon and Adam’s connection. Some Young and the Restless viewers think Sharon should be able to make her own choices. Others feel like Sharon should listen and steer clear of her risky former flame.

“Sharon is a grown woman who is capable of choosing who she wants to be friends with,” one fan insisted. “I’m tired of Sharon always being the pariah….she needs to stay far away from Adam,” said another. One more fan said, “In my opinion I think Sharon is addict to drama more then having feelings for Adam.”

Of course, Sharon can see a side of Adam that others in GC can’t see. Perhaps someone who can love Adam despite his flaws is exactly what he needs to settle down. After all, Adam wasn’t always this cutthroat. He had a softer chapter of his life once upon a time, so maybe Sharon can help him get back to that place.

Besides, it wouldn’t be much of a story without some conflict! Sharon’s support of Adam provides that, especially since they’ll be heating things up. The Young and the Restless spoilers say Sharon and Adam’s steaminess will bring some mayhem over the next couple weeks.

Do you think Sharon deserves the hate she’s getting and will continue to get over Adam? Is Sharon truly the only one who might be able to help him? We’ll give you updates as other Y&R details emerge. Stay tuned to the CBS soap and don’t forget to check CDL often for the latest Young and the Restless spoilers, updates and news.