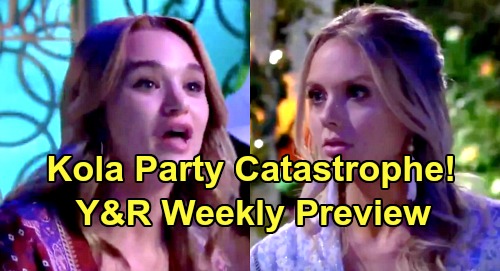 The Young and the Restless (Y&R) spoilers preview for the week of August 5-9 tease that some wild moments are on the way. First, let’s talk about Adam Newman’s (Mark Grossman) showdown with Nick Newman (Joshua Morrow). After Adam tells Christian Newman he’s his real daddy, Nick will explode. He’ll think it’s horrible for Adam to dump this info on the boy and leave him so confused.

Adam will defend the decision and remind Nick that he’s Christian’s father. He’ll feel like it’s best if Christian knows now, especially since he wants to bond with him. Adam will take things a step further by arguing that when he ultimately gets custody of Christian, he won’t let Nick anywhere near him. He’ll make it clear that Nick’s going to be nothing more than a memory in Christian’s mind.

An outraged Nick will show his disapproval by delivering a punch to Adam’s face. He’ll deliver one more for good measure, but Sharon Newman (Sharon Case) will arrive to push for peace. Back at Adam’s penthouse, Sharon will clean up Adam’s bloodied face before things take a passionate turn. Adam will insist he’s what Sharon’s wanted all along, and she’ll respond by making love to him.

Based on Y&R’s weekly promo, it looks like this sex session will be rough and intense. Adam will bring his A-game and leave Sharon drawn even further into his web. Meanwhile, Mariah Copeland (Camryn Grimes) will decide to combine Lola Rosales’ (Sasha Calle) bachelorette party with Kyle Abbott’s (Michael Mealor) bachelor bash. She’ll turn it into one big shindig, which will bring plenty of drama.

The Young and the Restless spoilers say Abby Newman (Melissa Ordway) will manage to get on Summer Newman’s (Hunter King) bad side at this event. It won’t be long until Summer’s hurling insults. She’ll contend that Abby plows through men like they’re bowling pins, so Abby will promptly throw a drink in Summer’s face. Not to be outdone, Summer will dump an entire ice bucket over Abby’s head in return!

Mariah will do her best to send these raging rivals to their corners and get the party back on track. Unfortunately, Theo Vanderway (Tyler Johnson) will show up to make a few waves. He’ll ignore Kyle Abbott’s (Michael Mealor) repeated warnings and stir the pot, so Kyle will order his ex-friend to leave.

Of course, Lola will be in a good mood thanks to the festivities. She’ll think maybe they should give Theo another chance and let him join the fun. Kyle will relent, but that could be a huge mistake. The Young and the Restless spoilers say Kyle will be on a mission to divulge the truth. Something major went down in New York, and Theo has the power to unleash chaos with his knowledge.

It sounds like some great episodes are coming up. We’ll give you updates as other Y&R news emerges. Stay tuned to the CBS soap and don’t forget to check CDL often for the latest Young and the Restless spoilers, updates and news.