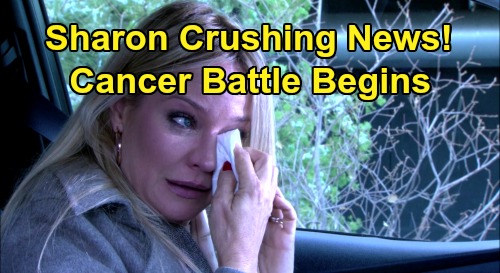 The Young and the Restless (Y&R) spoilers tease that Sharon Newman (Sharon Case) will make a discovery that leaves her unnerved. This discovery will be followed by some troubling news during the week of January 6-10. Since insiders have been insisting that a major medical story is looming for Sharon, the pieces are falling into place.

Y&R buzz suggests this troubling news will involve Sharon learning she has cancer. If that’s true as it appears to be, what will Sharon do? Sharon has a helpful heart and normally focuses on taking care of those around her. She’s not going to like the idea of being a burden to the people she cares about. Sharon won’t want to disrupt their lives and leave them filled with worry or dread.

Of course, Sharon’s loved ones wouldn’t feel that way at all. They would want to know about a cancer diagnosis so they could be there for Sharon in her time of need. Although Sharon may keep quiet initially, she’ll have to come clean about the battle she’s facing at some point. Sharon will need to accept that she can’t always be the mother hen who’s looking out for everybody. Sometimes Sharon needs people to look out for her, too.

The Young and the Restless spoilers confirm that Faith Newman (Alyvia Alyn Lind) will head back to boarding school only to return home again soon. That backs up this cancer idea. Faith misses home, but she loves all her friends at boarding school and has been having a blast. It would take something huge – like her mother’s health crisis – to bring her back to Genoa City during the school year.

Sharon will likely break the news to Rey Rosales (Jordi Vilasuso) first. The Young and the Restless spoilers say Sharon’s unexpected blow will put their relationship at risk – presumably because they won’t know if Sharon will pull through. They might even clash over treatment plans and how soon to tell Sharon’s kids.

Faith will certainly be worried along with Mariah Copeland (Camryn Grimes). Mariah hasn’t been in Sharon’s life all that long. She missed out on so many years with Sharon, so the thought of losing both the twin she never met and her mom will be brutal.

There’s been some Y&R buzz about Noah Newman (Robert Adamson) returning as well, which makes sense under the circumstances. It would be pretty ridiculous for The Young and the Restless to leave Noah out of a storyline like this. There’s no way Noah would just abandon his mom if he knew she had cancer. He’d want to come home and rally around her with the rest of the fam.

Sharon obviously (hopefully!) isn’t going to die, but she’ll have a tough fight ahead of her. She may try to put on a brave face, but she’ll be terrified under the surface. As this potential cancer story deepens, it should bring Sharon closer to her family and provide some heartfelt moments.