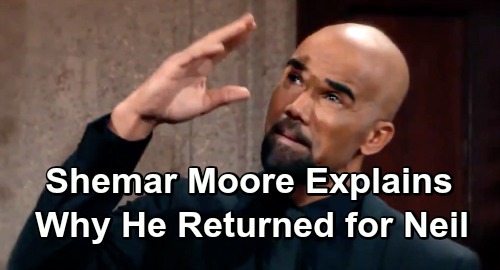 The Young and the Restless (Y&R) spoilers reveal that Malcolm Winters (Shemar Moore) will return to the CBS soap later this week. Unfortunately, a somber reason will bring Malcolm home. Once Malcolm receives the news of Neil Winters’ (Kristoff St. John) untimely death, he’ll make his way back to Genoa City to grieve.

In a recent interview with Soap Opera Digest, Shemar Moore talked about Kristoff St. John’s passing and how difficult it was to accept. He also gave a little preview of Malcolm’s upcoming eulogy and dished on why he wanted to make a comeback. It’s clear that honoring Neil and St. John was very important to Moore.

Moore actually texted with St. John the month prior to his death. They were eager to meet up and play some pool, but they never got the chance. “I kept telling myself, ‘I just talked to him. This can’t be happening. I just talked to him,’” Moore said. “And then I beat myself up like, I could’ve helped him, and all of that. And then you have to face reality.”

The Young and the Restless spoilers say art will imitate life when it comes to Neil’s difficult death. His family and friends will also face guilt over not being able to prevent this, but they’ll eventually reach a place of acceptance. That’ll lead to the funeral episodes, which will bring some powerful moments for Moore. He had nothing but positive comments about the writing for those upcoming scenes.

“I told the head writer (Josh Griffith), ‘It’s almost like you were hiding in my closest or somewhere in my house…literally word for word, it sounds like something I would say, it sounds like something I would write,” Moore said. He admitted that he added a few things to make it personal to his relationship with St. John, but he was incredibly happy with the sendoff he got to give his friend as well as the character.

Moore made it clear that there was never a question about whether or not he’d return for Neil’s farewell. He jumped at the opportunity to help Y&R viewers say goodbye. “I said, ‘I’ll do anything and everything…the fans deserve it because they followed Kristoff and his stories for so many years.”