The Young and the Restless Spoilers: Shey Moves In Together – But Rey’s Desire For Kids Tears Them Apart

BY hellodrdavis on May 19, 2019 | Comments: 2 comments
Related : Soap Opera, Spoiler, Television, The Young and the Restless 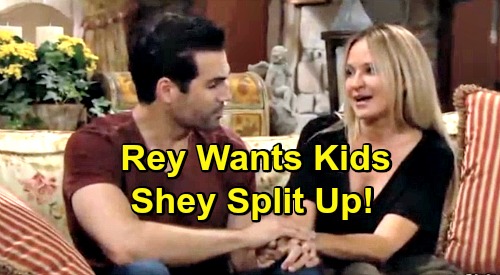 The Young and the Restless spoilers tease that Sharon Newman (Sharon Case) and Rey Rosales (Jordi Vilasuso) will take a big step in their relationship. They’ve been through a lot together, with Rey’s investigation of Sharon and the girls’ night gang during the JT Hellstrom (Thad Luckinbill) investigation. But Rey redeemed himself by helping Sharon and the gang escape their captivity and prove that JT was alive.

But now that they’re through all of that drama, Rey and Sharon have been spending more time together, and they’ve grown closer. They even went to Las Vegas to investigate Victor Newman’s (Eric Braeden) big secret, which turned out to be a very much alive Adam Newman (Mark Grossman). And given Sharon and Adam’s past, some fans have speculated that Adam might eventually come between “Shey.”

But it seems that Shey have remained solid throughout Adam’s revival and return to Genoa City. Sharon doesn’t seem particularly interested in Adam from a romantic standpoint, and Rey hasn’t shown any jealousy over Sharon’s old flame suddenly being alive. In fact, we don’t think that Adam will ultimately cause any major turmoil for Shey.

But there is something that might eventually become an issue for the couple. As Y&R viewers know, Mia Rosales (Noemi Gonzalez) recently found out that Arturo Rosales (Jason Canela) was the father of her baby, not Rey. Rey had ambivalent feelings about Mia’s pregnancy – a part of him was hoping that he was the father, but another part of him wanted his connection to Mia to just be over.

Well, Rey’s not the father, and he had a pretty intense reaction to finding out that he wasn’t going to be a dad. There was a part of him that was truly sad and disappointed, which only means one thing: Rey wants a family at some point in his life.

While he and Sharon are blissfully happy right now, we can’t help but wonder what’s going to happen when the day comes when Rey starts longing for kids. Although Rey’s age hasn’t been explicitly stated on the show, it’s clear that he’s at least 10 years younger than Sharon, and that Sharon’s old enough to have grown kids.

Sharon may not want to try to have more kids at this point in her life, or she simply may not be able to conceive. Either situation could cause a major problem in Shey’s relationship. Yes, they’re perfectly happy right now, but as time goes on and they have to deal with some of life’s realities, they may need to re-evaluate their relationship.

Ultimately, the issue of kids could drive the couple apart. Of course, even if they want to have children together and can’t due to Sharon’s age or health reasons, there would always be the possibility of a surrogate or adoption. Or, the couple could simply decide to go their separate ways.

Do you think that Rey will want to have kids of his own down the line – and will this ultimately drive Shey apart? Stay tuned to the CBS soap and don’t forget to check CDL often for the latest Young and the Restless spoilers, updates, and news.