The Young and the Restless Spoilers: Shocking Marriage Proposal Rocks GC – See Who Pops the Question and Why 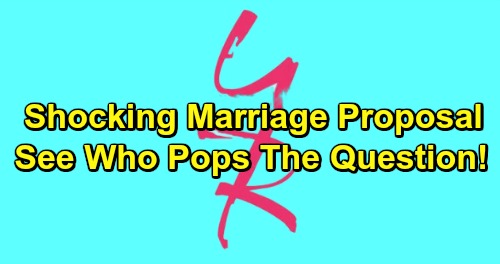 The Young and the Restless (Y&R) spoilers tease that a stunning proposal is on the way. One Y&R hunk will decide he wants to spend the rest of his life with the woman he loves. Which lucky lady will get some new bling? That would be Victoria Newman (Amelia Heinle), but she’ll probably have serious reservations when Billy Abbott (Jason Thompson) gets down on one knee.

Billy is an impulsive guy, but he’s really going a little overboard here. How many times does Victoria have to tell him she wants to take things slow? To be honest, it didn’t seem all that outrageous for Victoria to go let loose in Vegas. She deserved it after the nightmare she’d been through. Maybe it was a little out of character for her, but Victoria truly needed a break from all the chaos.

Of course, Billy had to be his usual pushy self. It’d be nice if he could wait until Victoria was ready instead of insisting on everything, but they do have a sweet relationship. The Young and the Restless spoilers say they’ll continue to help each other and strengthen their bond next week. Billy will determine that this feels right, so he just won’t see any reason to wait on popping the question.

However, there’s actually a big reason to wait – and that’s Victoria’s wishes. What has she said or done that even hints she’s prepared to tie the knot again? Nevertheless, Billy can’t take risks at the poker table anymore, so he’ll choose to gamble like this. He’ll give a passionate speech about his love for Victoria and how they belong together, which will leave her with a huge decision to make.

Based on Victoria’s actions so far, it wouldn’t be surprising if she turned Billy down. Victoria might contend that she’s just not ready to take that step yet. Then again, Victoria might give Billy a “not right now.” She might agree that they’re each other’s destiny before adding that she still needs some time.

The third option would be caving in and accepting Billy’s proposal. Victoria is still pretty vulnerable, but she feels safe in Billy’s arms. She might opt to make that safety permanent by remarrying Billy. The Young and the Restless spoilers say Victoria’s head will be spinning after Billy’s shocker, so she may struggle to know what the right call is.

It sounds like Y&R has loads of romantic drama in store. We’ll give you updates as other news comes in. Stay tuned to the CBS soap and don’t forget to check CDL often for the latest Young and the Restless spoilers, updates, and news.