The Young and the Restless Spoilers: Summer and Kyle’s Rushed Wedding – Lola Wakes Up to Heartbreaking Bombshell

BY Heather Hughes on March 7, 2019 | Comments: one comment
Related : Soap Opera, Spoiler, Television, The Young and the Restless 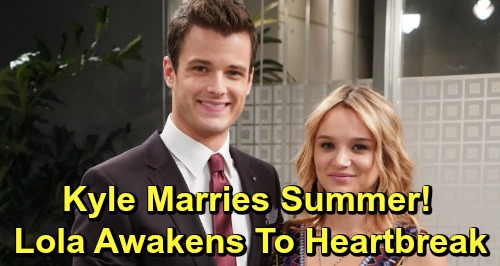 The Young and the Restless (Y&R) spoilers tease that Summer Newman (Hunter King) will deliver stunning news to her family and friends. During the week of March 11-15, Summer will spread the word about her engagement. She’ll reveal that she’s marrying Kyle Abbott (Michael Mealor) – and fast! Summer will want to lock in this deal right away, so it’s time for a beautiful Y&R wedding.

Kyle will keep his end of the bargain and give Summer exactly what she wants. He won’t put up a fight since he’s got a firm agreement with Summer. She’s giving Lola Rosales (Sasha Calle) the gift of life, so he can’t really complain. As long as Lola survives and thrives, that’s all that matters to Kyle. He can put up with a marriage to Summer if it means keeping Lola in this world.

The Young and the Restless spoilers say the rushed nuptials will cause quite a stir. There’ll be plenty of people wondering how and why this wedding is happening. Kyle certainly hasn’t been Summer’s biggest fan lately. Most of their recent interactions have involved arguments, so there’ll be some raised eyebrows.

Summer’s family is pretty wrapped up in the trial drama, so they may ask why she’s doing this now. Kyle’s going to face questions as well since people like Abby Newman (Melissa Ordway) know he’s been so devoted to Lola. Mariah Copeland (Camryn Grimes) will undoubtedly think Kyle has lost his mind!

Nevertheless, a deal is a deal. Kyle will try to keep his mouth shut about the terms and pretend Summer’s the one he wants. Lola will be the exception. The Young and the Restless spoilers say Kyle will come clean to Lola during the week of March 18-22. It sounds like he’ll fill Lola in on where she got her liver after she wakes up. Kyle will also have to drop the bomb that he’s now married to Summer.

Lola was on her way to get back together with Kyle when she was attacked by Mia Rosales (Noemi Gonzalez). She truly loves him, so she’s sure to be devastated. This is shaping up to be a messy love triangle, so stay tuned! We’ll give you updates as other Y&R details emerge. Stick with the CBS soap and don’t forget to check CDL often for the latest Young and the Restless spoilers, updates and news.