BY Heather Hughes on March 7, 2019 | Comments: one comment
Related : Soap Opera, Spoiler, Television, The Young and the Restless 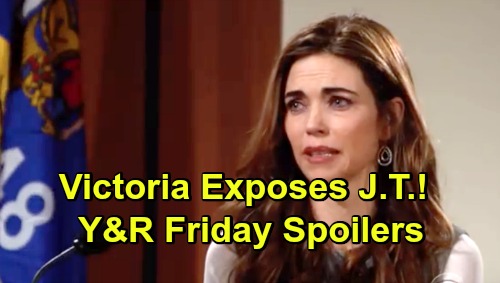 The Young and the Restless (Y&R) spoilers for Friday, March 8, tease that Michael Baldwin (Christian LeBlanc) will make a last-ditch effort to get the jury back on his side. It’s safe to say this has been one of the most unpredictable trials of Michael’s career. The biggest problem has been his clients’ inability to be honest with him. For whatever reason, the Newmans have kept huge secrets from their attorney.

Nevertheless, Michael isn’t a quitter! He intends to fight until the bitter end, so he’s shifting gears with a risky strategy. Michael was reluctant to put Victoria Newman (Amelia Heinle) on the stand initially, but now it’s a must. Victoria’s testimony may be the only thing that could help her gain sympathy with the jury and keep her out of prison along with Nikki Newman (Melody Thomas Scott).

The Young and the Restless spoilers say Victoria will get on the witness stand this Friday. Michael will ask her a few questions to get the ball rolling. It won’t be long until Victoria’s sharing the ugly details of J.T. Hellstrom’s (Thad Luckinbill) abuse. J.T. was controlling, manipulative and confrontational in the weeks leading up to his death – or “death” if he turns out to be alive as we suspect.

Victoria will describe the pain and shame of putting up with J.T.’s behavior. She’ll also talk about fearing for her life before Nikki rushed in and saved her. Victoria’s story will be compelling and heartfelt, but will it be enough to save her from incarceration? Not if Christine Williams (Lauralee Bell) can help it! Cricket will undoubtedly rip Victoria to shreds on cross-examination and do more damage.

Christine will admit domestic violence is horrible, but J.T. isn’t the one on trial here. She’ll argue that J.T. can’t stand trial because he’s dead – and that’s all thanks to Nikki. Christine may contend that Nikki used excessive force. The cover-up itself doesn’t look good for the ladies since it indicates guilt. Giving into the blackmail demands didn’t help their case either.

Of course, there’s also the little issue of Tessa Porter’s (Cait Fairbanks) kidnapping. Victoria was arguably the ringleader on that. As an abuse victim, forcing Tessa to suffer abuse – to the point that she thought she would die that night – looks terrible. Victoria also installed a camera to spy on Tessa’s activities, and Christine has already pointed out that’s exactly what J.T. did to Victoria.

In other words, Victoria is certainly a victim, but she’s a criminal as well. It’s the criminal that Christine will want to take down. Speaking of criminals, the cops will finally track down Tessa and take her into custody on Friday. It’s strange that Y&R delayed this arrest until now. It would’ve made more sense to capitalize on the momentum of Tessa’s gripping testimony, but better late than never!

While Mariah Copeland (Camryn Grimes) deals with another loved one being led away in handcuffs, Nick Newman (Joshua Morrow) and Billy Abbott (Jason Thompson) will team up. Perhaps they won’t trust Jack Abbott (Peter Bergman) to get Kerry Johnson (Alice Hunter) on board with a takedown plan. Nick isn’t involved in Jabot, but he’d definitely love to see Phyllis Summers (Gina Tognoni) pay.