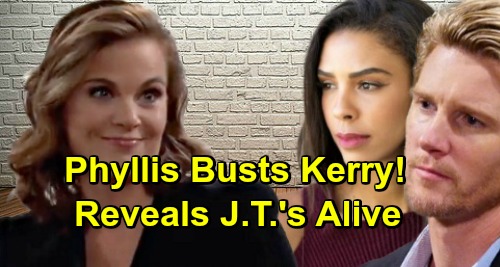 The Young and the Restless (Y&R) spoilers tease that Phyllis Summers (Gina Tognoni) could have a shot at redemption. She keeps insisting she sold out the others to help them, but does anyone really believe that except Summer Newman (Hunter King)? Phyllis clearly had a more selfish goal in mind that fateful night. It suddenly became every woman for herself, so she had to look out for number one.

Phyllis had already hinted to the others she would cut a deal if need be. Y&R fans shouldn’t be surprised she kept her promise. Phyllis refused to go down for this, which meant Victoria Newman (Amelia Heinle), Nikki Newman (Melody Thomas Scott) and Sharon Newman (Sharon Case) had to pay the price.

Phyllis is trying to help the others now, but she’s doing a terrible job of it. She did serious damage as Christine Williams’ (Lauralee Bell) star witness, so Nikki and the others could land behind bars. Phyllis knows she’ll face plenty of blame if that happens. She probably won’t feel bad enough to regret her immunity deal, but she’ll hate it if Nikki, Sharon and Victoria go to prison because of her.

You can bet that’ll only add to Nick Newman’s (Joshua Morrow) outrage. The same goes for Billy Abbott (Jason Thompson) and even Jack Abbott (Peter Bergman). They all have personal connections to the women involved, so Phyllis will take some serious heat if the ladies can’t wiggle out of this.

Thanks to Phyllis’ testimony, Tessa Porter’s (Cait Fairbanks) admissions and the shocking evidence, Nikki and the others could indeed be going down. Is there still a chance for Phyllis to redeem herself? There is if she can help exonerate the ladies. How would Phyllis do that? By figuring out that J.T. Hellstrom (Thad Luckibill) is still alive!

There’s no confirmation that J.T. survived yet, it makes sense considering Luckinbill’s been back to shoot new Young and the Restless scenes. It might be the only way out at this point. We also know a big reveal linked to Kerry Johnson (Alice Hunter) is in the works. Perhaps Phyllis will uncover proof of Kerry’s secret partnership with J.T. and blow this wide open.

It’d be fitting for Phyllis to be the one who saves the day. Will that redeem her after such a crushing betrayal? The Young and the Restless spoilers say some gripping drama’s ahead, so stay tuned. We’ll give you updates as other Y&R news comes in. Stick with the CBS soap and don’t forget to check CDL often for the latest Young and the Restless spoilers, updates, and news.