The Young and the Restless Spoilers: Summer Gets A New Man – Y&R Gets A New Theo With Tyler Johnson, ‘Hottest Guy in America’

BY hellodrdavis on May 12, 2019 | Comments: 5 comments
Related : Soap Opera, Spoiler, Television, The Young and the Restless 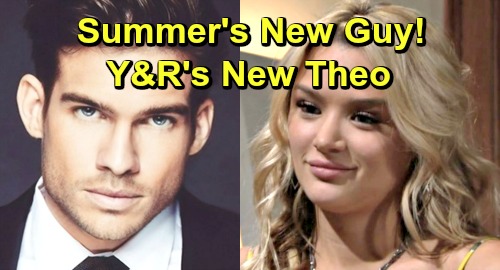 The Young and the Restless spoilers tease that Summer Newman (Hunter King) may soon have a reason to forget all about Kyle Abbott (Michael Mealor). Summer has been on a mission to make life miserable for Kyle in the one way she still can – by sabotaging his career path at Jabot. She’s been doing her best to make it seem like Kyle is being derelict in his duties at work due to his relationship with Lola Rosales (Sasha Calle).

But Summer doesn’t seem to realize that there’s another route to happiness and satisfaction aside from playing games with Kyle and getting payback for their split. As Y&R viewers know, there seems to be another guy who is interested in spending time with her, and that’s Theo Vanderway (Nic Luken).

Theo is a social media influencer from New York City with a lot of clout and apparently a lot of interest in Summer. According to Y&R spoilers, Summer and Theo will soon meet for drinks at Society. Summer may be under the impression that she and Theo are just there to foster a deal between his influencers and the Jabot Collective, but it seems that Theo may have a deeper interest in Summer.

We should also note that the actor currently playing Theo, Nic Luken, will soon be exiting the role to make way for Tyler Johnson to take over the part. Tyler Johnson will begin airing as Theo on Monday, June 3, and it appears that he may have been cast with the specific goal of being Summer’s new love interest.

Tyler Johnson will be a hot new addition to Y&R, and his version of Theo is sure to help Summer make some waves around Genoa City. Of course, when Summer does move on from Kyle, she’ll want to be sure to do everything in her power to try to stir up jealousy in Kyle, and what better way to do it with a hot new man.

Might Kyle start to feel jealous of Theo’s relationship with Summer? It’s likely, considering that Tyler Johnson was once named the “Hottest Guy In America” by Seventeen Magazine and has modeled for Tommy Hilfiger, Ralph Lauren, and more. He might put Kyle’s recent modeling efforts to shame!

What do you think? Are you excited to see Summer with a hot new man? Stay tuned to the CBS soap and don’t forget to check CDL often for the latest Young and the Restless spoilers, updates, and news.