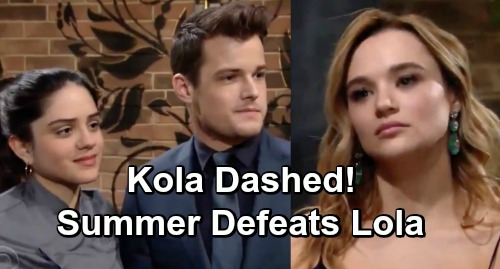 The Young and the Restless spoilers tease that Lola (Sasha Calle) is learning about timing as it relates to the subjective art of love. Yes, she and Kyle (Michael Mealor) are in enchanted with each other and Summer (Hunter King) appears to be a second choice.

But Skyle’s history and recent circumstances makes Kola far less than a sure thing. As The Young and the Restless spoilers preview tells us, new Y&R episodes this coming week will show that Summer is going to fight hard not to lose Kyle to Lola.

Fans will also note that the new head writer, Josh Griffith, is morphing Summer back into someone fans can love and respect while removing Lola from the ridiculous pedestal upon which Mal Young had the ‘virgin’ perched. This augurs well for Summer to be the eventual winner in her battle with Lola, especially if her intimate experience with her husband results in pregnancy.

Lola is a person all her own. She was progressing on a positive attitude, but not experience where her business, La Vida Lola was concerned. Belief in herself and God, as she and her family often reference as meaningful in their lives, allowed blessings to be earned when Abby (Melissa Ordway) tapped Lola to be the chef for the forthcoming restaurant project that involves Devon (Bryton James).

So, why can’t Lola and Kyle just pick up where they left off? Why can’t Summer simply be told that Skyle never really was right and that their marriage be ended? And then there’s a third question.

Kyle isn’t legally obligated to stay with Summer, even though he said he would remain committed to their nuptials for a year. The transplant worked and, thankfully both ladies are doing okay, which includes the liver donor, Summer. So, why not just tell Mrs. Abbott goodbye?

Lola’s positive influence over Kyle has been immense, driving deeper than even he realized. Being with her allowed him to learn, for the first time in his adult life, what selfless sacrifice looks like. But Summer became the surprise selfless example.

Incredibly, at first it so seemed, Summer expressed her true love for Kyle in actually wanting to save Lola’s life. The then Miss Newman believed, sincerely, that Kyle would realize that he loved her, not Lola, if he just had enough time to realize that perceived fact.

Summer might not actually have been wrong. No, considering the bold sacrifice she offered to Lola, in the form of a gift to Kyle, that last declarative statement must be rewritten.

Summer may be proven right. Even within this feature, the writer, as may also be true of a growing amount of viewers, can see that Kyle has retained deep feelings for Summer that go beyond obligation.

It’s not certain yet if Mr. Abbott’s conflicted emotions, which is an apt view of his current demeanor, will resolve completely. But the longer he stays with Summer, the greater the chances seem to be that Skyle will survive.

Kyle’s turn-down of Lola’s Genoa City Athletic Club offer may be considered a turning point moment upon reflection. Yes, Kola may have already been dashed because of the change Lola caused in Kyle’s heart. That wasn’t projected, which also makes this a compelling storyline.