The Young and the Restless Spoilers: Summer’s Vengeful Side Unleashed – Ditches Plan to Win Kyle Back, Wants Him Miserable Instead

BY Heather Hughes on May 14, 2019 | Comments: one comment
Related : Soap Opera, Spoiler, Television, The Young and the Restless 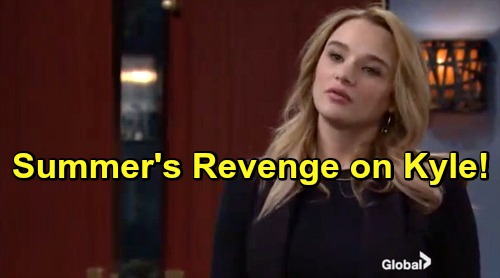 The Young and the Restless (Y&R) spoilers tease that Summer Abbott (Hunter King) will have a big decision to make. After Lola Rosales (Sasha Calle) accepts Kyle Abbott’s (Michael Mealor) offer to move in, Summer will be at a crossroads. Her mission to win Kyle over is getting harder, so she’ll have to figure out what’s next.

It’s clear that Kyle’s fed up with Summer and prepared to keep some firm boundaries in place. He’s finally taking a stand, so Summer’s guilt-tripping, needy side isn’t going to work anymore. Kyle and Summer have faced nothing but tension lately. Since Summer’s running into so many hurdles, she’s growing frustrated and may end up going in a new direction.

You may have heard that Tyler Johnson is set to play the role of Theo Vanderway starting June 3. Nic Luken has made some appearances as Theo, but he’s not exactly the right fit. The Young and the Restless was looking for a bolder choice – perhaps someone who could work as a long-term love interest for Summer.

This “Kola” and “Skyle” triangle has led to quite an uproar among viewers, so Y&R may be eager to end it – at least for now. However, that doesn’t mean Summer will just leave Kyle and Lola in peace. If she can’t have Kyle, she may decide Lola shouldn’t either. Summer gave up part of her liver to save Lola’s life, but she got gypped on her part of the deal.

Of course, Summer really should’ve saved Lola because it was the right thing to do, but that’s just not who Summer is. She has a softer side sometimes, but there’s always an angle to be worked. Like her mom, Phyllis Summers (Gina Tognoni), Summer tends to look out for number one.

The Young and the Restless spoilers hint that Summer may give up her fight eventually. Perhaps some incident will finally make things click for Summer. She may realize she’s been hurt too deeply to even want Kyle at this point. Revenge would probably be more satisfying than chasing a man who doesn’t want her.

Theo could easily pitch in with that vengeful plan. Whatever the case, Summer may want to happily date her new hunk and force Kyle to end up all alone. Will she break “Kola” up out of spite? Will Summer want Kyle to be as miserable as she’s been?