BY Heather Hughes on April 17, 2019 | Comments: one comment
Related : Soap Opera, Spoiler, Television, The Young and the Restless 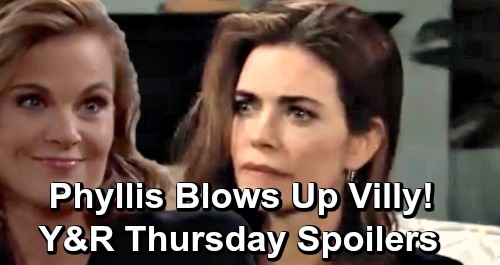 The Young and the Restless (Y&R) spoilers for Thursday, April 18, tease that Phyllis Summers (Gina Tognoni) will infuriate Billy Abbott (Jason Thompson). On Wednesday, Billy’s down on one knee proposing to Victoria Newman (Amelia Heinle) when Phyllis starts banging on the door. Phyllis comes over right after talking to Summer Abbott (Hunter King) about the hookup she once had with Billy.

That’s important since Phyllis might deliver payback on Thursday. Summer still blames herself for that night, but Phyllis believes Billy took advantage of her daughter – and she’s right. Billy pounced on Summer immediately after his relationship with Phyllis blew up. He wanted to hurt Phyllis for betraying him with Nick Newman (Joshua Morrow), so sleeping with Summer was the perfect strategy, at least for a lowlife.

Billy’s motives for having sex with Summer were purely vengeful. Just because the encounter was consensual doesn’t make it right. Will Phyllis spill the whole sordid tale to Victoria, the woman Billy wants to spend the rest of his life with?

If so, that could certainly affect whether Victoria accepts this proposal. She wasn’t eager to rush into marriage again anyway, so this could tank Billy’s chances. The Young and the Restless spoilers have been pointing to shocking family issues for “Villy,” so Billy sleeping with Victoria’s niece fits the bill. It could take some work for Billy to recover from a blunder like this.

Other Young and the Restless spoilers say Mariah Copeland (Camryn Grimes) and Tessa Porter (Cait Fairbanks) will head to the cottage. They’ll want to tell Sharon Newman (Sharon Case) what just went down at the coffeehouse. Mariah will try to hide how rattled she is as she describes the brick that smashed the window. She’ll mention the disturbing message, which was directed at her personally.

Since Wednesday’s note warns Mariah to give up her gossip and insists she’s ruining people’s lives, it should be interesting to see where this story’s headed. GC Buzz is more heartwarming than hard-hitting these days, especially with Mariah at the helm. She’s not the twisted gossip queen that Hilary Hamilton (Mishael Morgan) once was.

GC Buzz is supposedly sappy stuff now with the occasional news story thrown in. Of course, Y&R could rewrite things and invent some gossipy angle that Mariah covered. Then again, the brick-thrower may wrongfully believe Mariah’s ruining lives because of her romance. There may be some belligerent viewer who’s targeting Mariah for being a public figure who’s in love with another woman.

Regardless, Sharon will obviously be upset when she gets updates. She’ll fear for Mariah’s safety along with Tessa and even Mariah herself. This is only the beginning, so Y&R fans can undoubtedly expect other scary incidents as time goes on.

Finally, The Young and the Restless spoilers say Nikki Newman (Melody Thomas Scott) will team up with someone unexpected. She recently sought Rey Rosales’ (Jordi Vilasuso) help solving Victor Newman’s (Eric Braeden) mystery, so he wouldn’t really be much of a surprise. However, Rey did agree to mull it over. Y&R might just be stretching their definition of unexpected a little.