BY Heather Hughes on April 24, 2019 | Comments: one comment
Related : Soap Opera, Spoiler, Television, The Young and the Restless 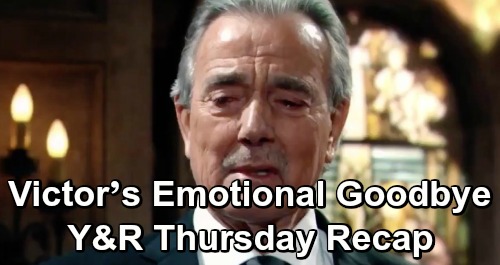 The Young and the Restless (Y&R) spoilers and recap for Thursday, April 25, tease that Genoa City residents will gather to remember Neil Winters (Kristoff St. John) and celebrate the wonderful life he lived. After Malcolm Winters (Shemar Moore) shows up at Devon Hamilton’s (Bryton James) penthouse, they’ll share a warm hug before heading to the church. There’ll be plenty of other guests on hand to mourn.

As everyone files in, Ana Hamilton (Loren Lott) will sing and the reverend (Stan Shaw) will get up to speak. He’ll talk about the complicated feelings that come with a sudden death and add that Neil was loved by his family members. Lily Ashby (Christel Khalil) will want to say a few words, but she’ll be too choked up to do it. However, Malcolm will manage to make a powerful speech about his half-brother.

As he battles pain, Malcolm will talk about how Neil would’ve had the perfect words of wisdom. He’ll bring up the corny jokes Neil used to tell and the strong bond between siblings. Malcolm will wish he could’ve told Neil how he felt before he died. He’ll insist that Neil helped him become the man he is today. Malcolm will cry as he hopes Neil knew how much he loved him.

After a short speech from Dr. Nate Hastings (Sean Dominic), it’ll be Victor Newman’s (Eric Braeden) turn to break down. He’ll get emotional over how he watched Neil grow and change over the years. Victor will point out that he truly trusted Neil and will miss his friend. Jack Abbott (Peter Bergman) will also speak about the lives Neil not only touched but saved. He’ll be grateful to be part of that group.

Once Devon steps up, he’ll share what a great father Neil was and how he lived with so much love. Devon will note that he may not have Neil’s DNA, but he still hears his dad’s voice in his head guiding him and always will. Soon after, Cane Ashby (Daniel Goddard) will speak about the second chances Neil gave and the strength he gave his loved ones.

Lily will finally gather up her courage and step behind the podium. She’ll cry over feeling alone and insist that Neil should’ve had more time. Lily will want to honor Neil by being there for one another during this difficult time. She’ll tell Neil she loves him as she approaches his casket.

The Young and the Restless spoilers say the reverend will conclude the service, so Devon will thank everyone for being there. Leslie Michaelson (Angell Conwell) will assure Devon that Neil was the best guy she’s ever known. Devon will also let Neil’s ex, Sofia Dupre (Julian Pace Mitchell), know that he’s there for her if she ever needs anything. That goes for Moses Winters (Dax Randall), too.

Traci Abbott (Beth Maitland) will also remind Lily that she’s got a support system, which includes Cane. Phyllis Summers (Gina Tognoni) will embrace Malcolm as well, so Y&R fans will definitely see some warm moments during this tragic time. Finally, Devon and Lily will clasp hands as they gaze at Neil’s picture. It’ll be a fitting end to this beautiful funeral episode.